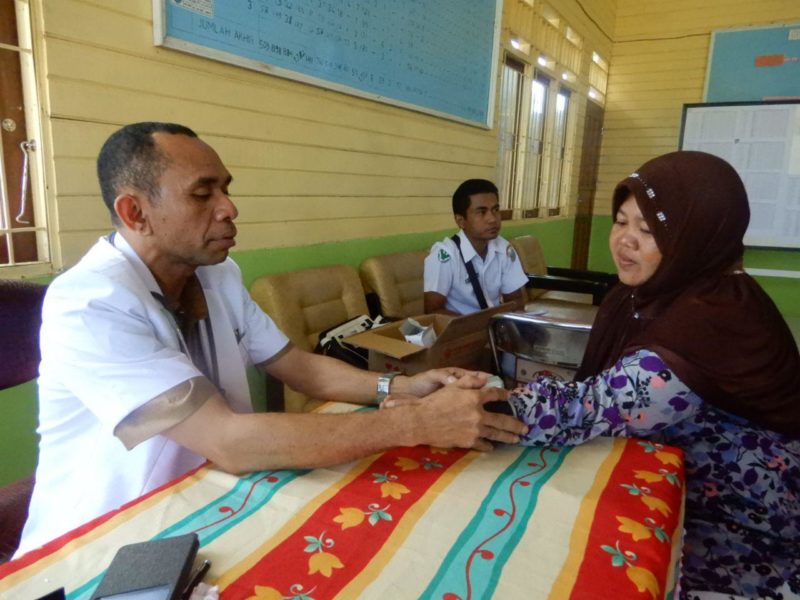 The figure of malaria case or Annual Parasite Incidence (API) in Nabire Regency reportedly continued to decline in the last three years. A data compiled from all community health centres and private laboratories in Nabire indicates that by June 2018, the malaria case is only 13,36% compared to 71% in 2015.

Based on this data, the Nabire Health Office is confident be able to contribute to accomplishing the elimination of malaria by 2028 for Papua Province and by 2030 for Indonesia.

Yenni Derek, the manager of malaria control program of the Nabire Regional Health Office, said the API number of 13.36 % indicates the number of Annual Blood Examination Rate (ABER) or the averaged number of examined patients (178.44%) and the Slide Positivity Rate (SPR) of malaria (7.488%).

If the national figure shows 1 SPR per 1,000 populations, which means of 1,000 people, only one is malaria positive. Therefore, in Nabire, there are 14 malaria positives amongst 1,000 inhabitants. “The API is obtained by adding up the total of malaria cases and then divide it with the number of the population before multiplying it with 1,000,” Derek explained to Jubi on Wednesday, 24 October 2018.

The Regional Health Office, said Derek, continues to reduce these numbers through ongoing programs, such as the distribution of mosquito nets and community counselling.  The office also established the Nabire Center for malaria control management and conducted training for the Participatory Learning Action (PLA) facilitators by involving the village community.

She also said for the last three years, the Regional Health Office and the community health centre has conducted a regular check-up, public awareness campaign and the distribution of mosquito nets.

“However, I believe that people nowadays have become more aware and understand the importance of this issue. We observe that currently they already use the nets distributed by our officers,” she said.

“If someone feels a fever, do not immediately give them other medications. Firstly, you should examine the blood of patients first because fever does not mean malaria,” he said.

Moreover, he said the participation of community and stakeholders such as the private sector and the government should work together for several reasons. “The local government agencies such as the Public Works Office, the Environmental Service Office, should collaborate to provide the clean water, sanitation and clean environment. So it’s not a responsibility of a certain agency,” he said.

Meanwhile, the Head of Technical Unit for AIDS-TB-Malaria of the Papua Provincial Health Office dr. Beeri Wopari said Malaria Center for Meepago indigenous area is in Timika. It was established as a coordination centre, not for a centre to control and prevent malaria.

“It’s only for coordination. According to the policy of the Ministry of Health and the Papua Governor’s Regulation on malaria control, it divides per indigenous territory, and for Meepago, it’s base is in Timika,” he said.

To lead to malaria elimination goal for Papua in 2028, he said, it needs cross-sectoral cooperation between the government agencies and private institutions as well as the participation of the community.

“We have met and coordinated in the meeting involved all relevant stakeholders in Meepago customary area some time ago in Timika,” he said.

According to Wopari, the leading units, namely village chiefs, communities and families should initiate such efforts to accelerate malaria control. Then it goes up to the level of sub-districts, regency and province. They all are needed to facilitate the malaria control program.

“So we use the bottom up method to facilitate the malaria control and work together with the community and relevant stakeholders to ensure the program achievement. Therefore we need to be integrated into one coordination to reduce the malaria cases in Papua regions,” he said.

“We should know what does the contribution from the community, what does the role of the government. If we want to achieve the malaria elimination goal, the community should have their action plan; therefore the health officers know their problems,” he said.

Meanwhile, a Nabire resident Suyono admitted the malaria prevalence in Nabire has reduced. Twenty years ago, he arrived in Nabire and had malaria frequently, but now the disease has never reoccurred.

“I often had malaria when I arrived here twenty years ago. Mosquitos were everywhere perhaps It was still a dense forest,” he said.

He admitted that at that time there was no malaria eradication program and people also less aware of the clean environment and there are also no free mosquito nets.

“Well, that’s the situation in the past. However, I see people rarely have malaria this day,” he said. (*)

Residents Complain about Poor Quality of Rice for Civil Servants

SAFETY FACTOR CAUSE MANY TEACHERS ABSENT FROM DUTY

NEWLY-RECRUITED TEACHERS SHOULD NOT BE PLACED IN BUREACRACY