Logistics Railway to Build in Papua 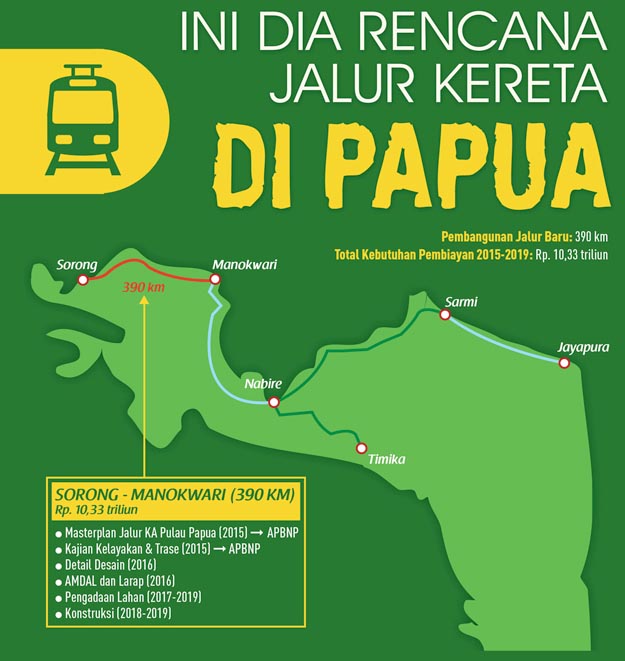 Jayapura, Jubi – The government is planning to build a freight railway to connect the cities of the northern coast of Papua (Nabire-Sarmi-Jayapura).

“We need to talk about the opportunity and obstacles that possibly happened by synergizing and synchronizing the working plan. It is expected the development of railways and the mapping of customary areas map could be materialized and give a real impact,” said Papua Governor Lukas Enembe in Jayapura on Wednesday (10/8/2016).

In line with the planning, said Enembe, through the Law of Land (UUPA), it would give recognition on the tenure right in the National Land Law. Furthermore, the Article 1 of the Agrarian Minister’s Regulation No 5/1999 stated the tenure right is the authority posed by certain customary law community, which the citizens use it to take benefit on the natural resources including the land for their life and livelihood.

“Law No 21/2001 on Special Autonomy for Papua also give recognition on the tenure rights in Papua,” said the governor. According to him, the system of area connection and logistic, and the construction of road access in Papua has not linked the access between the highland and coastal areas in the northern and southern Papua.

“This is the reason why it can not reduce the expensive rate in the highland area. Therefore the road construction through the construction of railway network has become a priority,” said Enembe.

He added in Papua, the problem is not about the complexity or difficulty, but it only needs a synergy and attention from the Government and Regional Government to work with the customary people for development in Papua. “The important thing here that should be a concern is how the all stakeholders to manage the development in Papua in the future in line with the goal of ‘Papua Stands, Independence and Prosperous,” he said. (*/rom)

Waibron Landfill Site to Operate in 2015

No Rice Rations for Civil Servants in Dekai for Nine Months