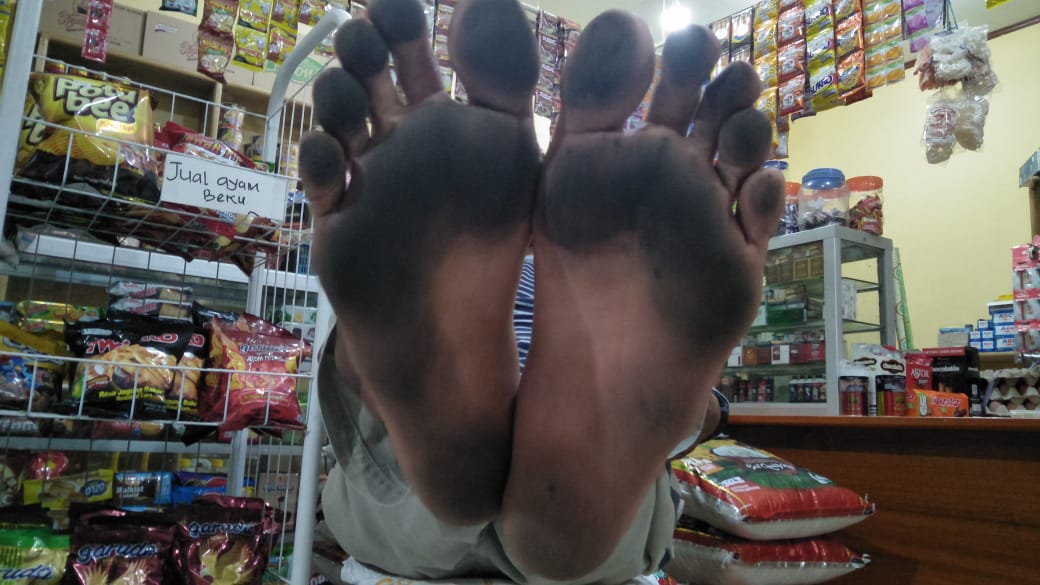 A resident lives near Maruni cement factory shows his soles of feet, merchandises and furniture covered by the black dust. – Jubi/Personal Doc.

Manokwari, Jubi – Residents of Dobut Village and other surrounding villages in Manokwari Selatan sub-district feel anxious concerning black dust scattered by the wind to their villages. They allege Maruni cement factory to cause this dusty air pollution.

The Village Chief of Dobut Septinus Aibu said hundreds of residents complained to have respiratory problems. Besides inhaling polluted air, the black dust now covers the roof of houses, get in the homes and pollutes everything inside.

“We have respiratory problems. It’s hard to breathe. There is thick dark haze during the day though it’s only the dust blown by the wind,” Septinus Aibu told Jubi in Manokwari on Wednesday (27/11/2019).

He further admitted to reporting his incident to the Provincial Environment and Land Office of West Papua. He hopes this relevant office will promptly follow up this report. However, his response has not yet responded, said Aibu.

“I have met the official from the Provincial Environment Office, but I found no definitive answer,” he said.

In the meantime, a resident Slamet who lives in a location near Maruni cement factory also has a similar complaint. He said kiosks and food stalls along the road where the cement factory built fully covered of black dust. “Stalls and everything inside fills with dust; even it covers the floor of houses. It’s all full of black dust,” said Slamet.

In responding to this issue, Derek Ampnir, the Head of West Papua Provincial Disaster Management Agency (BPBD), confirmed Jubi by a short message on Wednesday that the agency will immediately address the alleged air pollution. “Where is the location? Okay, we’ll take action,” texted Ampnir.

The black dust incident that allegedly comes out from the manufacturing activity of Maruni cement factory has been viral on social media, including some photographs, showed the black dust. However, until the news is published, both representatives of the cement factory and local government official do not give any comments on this issue. (*)