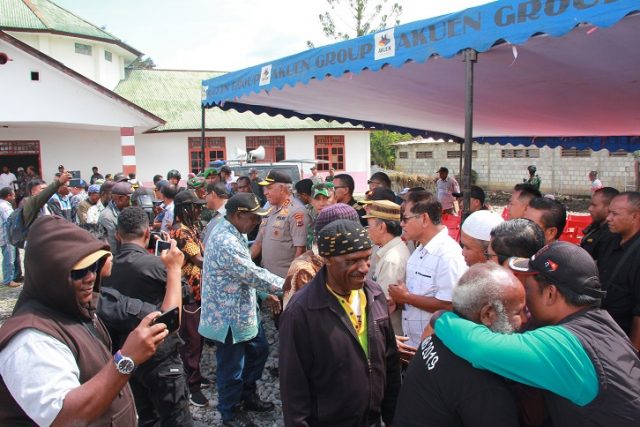 Local leaders and organisations are shaking hand after the meeting held in the LMA Jayawijaya office. -Jubi/Islami

The meeting was held in LMA Jayawijaya office on Friday (18/10/19) and attended by Papua Police Chief, XVII/Cenderawasih Military Command and local government officials. All parties agreed that they should forgive each other and support law enforcement against the perpetrators.

During the meeting, the migrant organisation, Paguyuban Nusantara Jayawijaya, told migrant victims of the incident accepted apologies of indigenous people. It also said all fears and suspicions among both sides must persuasively end. Also, they encourage those who fled outside of Wamena to return, and the authorities should take the perpetrators to court. Moreover, they stated their support to the local government in rehabilitating the situation in Wamena gradually.

Meanwhile, the Papua Police Chief Paulus Waterpauw said the meeting successfully held due to strong coordination between the LMA, police and local government of Jayawijaya.

“It’s a good initiative because the Mukoko tribal chief had opportunity expressing apologies on behalf of his people to the victims and their family,” said Waterpauw.

Further, he said the Paguyuban Nusantara has also accepted these apologies which he thought would be an excellent starter to solve the recent conflict in Jayawijaya.

“The police could only help to solve this problem morally because the regent can help more to accommodate it,” he said.

Meanwhile, a community leader from Mukoko tribal Agus Hubi said the conflict in Wamena would be gradually solved. Regarding this, Mukoko tribe would fully responsible to resolve it. He further said the result of this meeting would be discussed more in an internal meeting of LMAs.

“We’ll take the result of this meeting to LMA. Today we shake hands and agree to find solutions for the recent problem,” said Agus Hubi.

“Resolution would be a moral burden for each tribal chiefs, but the issue of safety and security would be a responsibility of each person in the community,” he said.

Meanwhile, the Jayawijaya Regent John Richard Banua said the local government highly appreciate the LMA Jayawijaya for conducting the meeting. Further, he thinks the forum was able to accommodate any ideas and suggestions from the floor to materialise the reconciliation in Jayawijaya Regency.

“Both parties have expressed apologies and forgiveness; therefore, let us hand in hand running and supporting the government. Church leaders, tribal chiefs, and people let’s do together,” said Banua.

“There is no discrimination between one tribe to another. All contribute to the development of this regent and the harmony of the brotherhood relationship,” he added. (*)