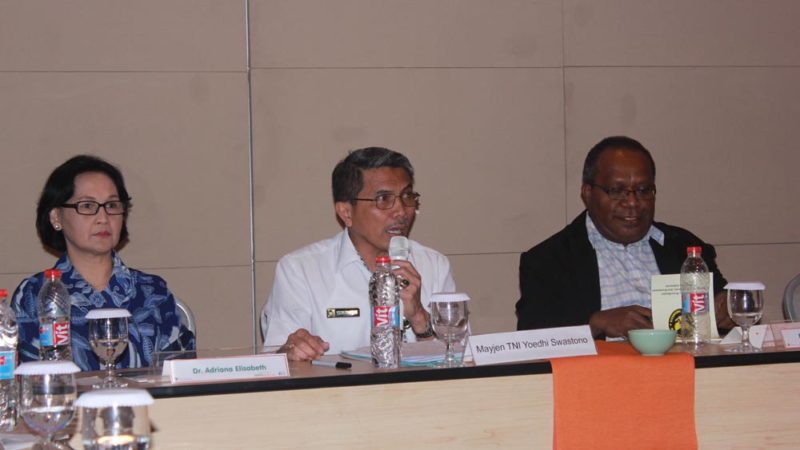 Jakarta, Jubi – The Indonesian Institute of Science (LIPI) and Papua Peace Network (JDP) held the 7th Exploratory Summit on 17-19 November 2015 at Sentul City, Bogor to discuss the roots of problems in Papua. The previous meetings were held at Jimbaran (Bali), Manado, Lombok, Yogyakarta, Semarang and Jakarta.

“The 7th summit is aimed to (1) discuss the root of political, legal, security and human rights issues in Papua in addition to discussing contributions from participants and speakers in order to materialize Papua as Peace Land,” LIPI researcher Dr. Adriana Elisabeth who led the Road Map Papua study told Jubi on Thursday (19/11/2015) at Hotel Haris, Sentul City.

Further, she said the meeting was also to anticipate the potential for violence in the run up to the simultaneous regional head elections on 9 December 2015.

She said representatives of government ministries, security agencies, univerisities, non-governmental organizations and the media, including Jubi, participated in the meeting.

Dr. Neles Tebai said the exploratory meeting has discussed several issues related to externalization or regionalization of Papua conflict issues in the Asia Pacific region. “It’s including the recognition of the United Liberation Movement of West Papua (ULMWP) as observer in the Melanesian Spearhead Group (MSG) in June 2015. Regionalization gets intents along with the discussion on human right violations issue in Papua during the Pacific Islands Forum (PIF) in Port Moresby in 2015, which resulted several recommendations including to send the fact finding team against human right violations in Papua. It indicates the conflict of violence and human right violation are still happening in Papua,” said Tebay.

Both Dr. Adriana and Pater Neles also said the implementation of simultaneous regional head election on 9 December 2015 in 11 regencies of Papua Province and 9 regencies of West Papua Province is disposed to conflict as the ‘noken’ system is still applied in some regencies.
“In some polling stations in the Central Highland area, the regional head election would use the noken system referred to the Melanesian cultural tradition. According to the Constitutional Court Decree No. 47-48 Year 2009, the voting used the noken system is legal, but it has a tendency to be manipulated,” Dr. Adriana said.

“Besides, the implementation of regional head election in Pegunungan Bintang Regency and Yahukimo Regency are full risk of geographical and access of transportation of polling box distribution due to the long-distance of the capital city to the polling stations. Another violence potency related to the regional head election is supporters’ crash that potentially occurred in Nabire, Waropen, Keerom, dan Boven Digoel,” added Pater Neles.

Through this 7th exploratory meeting, LIPI, JDP and participants further said both resources have resulted several inputs for the local governments related to the political and security affairs as well as legal and human right issues in Papua.

Here following seven recommendations for the government: 1) State to the public about the progress of investigation and obstacles in the process of human right violation solving in Papua; (2) Conduct socialization about the urgency of Military Regional Command in West Papua Province and Mobile Brigade Headquarters in Wamena; (3) Guarantee the transparent and neutrality of the election commissionaires, Police/Military personnel and civil servants in the implementation of simultaneous regional head election in Papua; 4) Appoint a diplomat who understand the Papua issues in responding the externalization or regionalization of Papua issues; 5) Build a peace in Papua through a gradual process of dialog by involving the relevant stakeholders; (6) Guarantee the implementation of the Law No. 21/2001 about the Special Autonomy for Papua Province as amended in the Law No.35/2008 could run optimal and consistent; and (7) Strengthen the coordination of three pillars (Local Government, Local Parliament and People’s Assembly) in Papua related to the optimization of the Law No. 21/2001 on the Special Autonomy for Papua Province as amended in the Law No. 35/2008. (Victor Mambor/rom)

Too Many Papuans Get Killed on Their Land, says Councilor