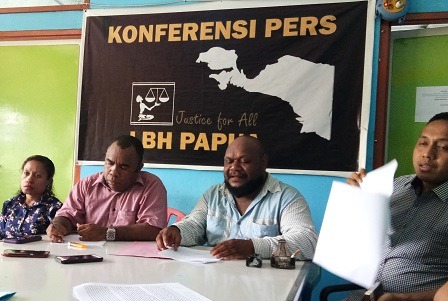 Gustaf Kawer, the Chairman of the association of Papua human rights advocates (PAHAM), said through her racism taunts, Mak Susi has caused public clashes in both provinces of Papua and West Papua. -Jubi

Jayapura, Jubi – Tri Susanti a.k.a Mak Susi gets twelve months sentence on Wednesday (29/1/2019). The public prosecutor from Surabaya District Prosecutors Office charges her with Article 14 verse (1) and (2) in conjunction with Article 15 Law No.1 of 1946 of the Criminal Law Code.

Gustaf Kawer, the Chairman of the association of Papua human rights advocates (PAHAM), said through her racism taunts, Mak Susi has caused public clashes in both provinces of Papua and West Papua. Although Mak Susi is legally and convincedly proven to commit a crime as covered in those relevant articles of the Criminal Law Code, the prosecutor Mohamad Nizar only accuses her of twelve months punishment from the maximum sentence that she might get.

Article 14 Verse 1 says a maximum sentence for defendants is ten years, whereas Verse 2 says three years. Meanwhile, Article 15 says defendants could get a maximum of 2 years in prison. However, the prosecutor only charges her for twelve months.

“He charges for the minimum. Indeed, it is the minimum punishment. In my opinion, it does not fair referring to she has done and its impact on the public. The prosecutor should charge her with the maximum punishment,” said Kawer.

According to him, the application of Law No. 1 of 1946 is very much outdated, despite it can also show how ignorant the prosecutor towards justice. “This law has established since the colonialization era with some adjustment to the current situation. Why does it still be used? It is an easy option for them to use,” said Kawer.

Moreover, Kawer argues that because of the widespread impact of her taunts, it caused demonstrations and mass riot, dead victims as well as dozens of indigenous Papuans get arrested in Balik Papan, Jakarta and other towns in Papua. The sentence over Mak Susi, according to him, should be the maximum to bring a sense of justice to the victims. Kawer also assumes Mak Susi will have a light sentence for less than twelve months.

In the case of another defendant Syamsul Arifin, a civil servant who shouted racism expression in the incident occurred at Papuan Student Dormitory in Surabaya in last August, he sentenced 5 months in prison on Thursday (30/1/2020). His sentence is lighter than the prosecutor’s charge of 8 months. Syamsul charged with Article 16 of Law No. 40/2008 on the Elimination of Discrimination, Race and Ethnic.

“From this process, we should be aware that racism has not happened in public. But on the last 16 August, we can see that racism also occurred in law enforcement. From the police, prosecutors to judges in the court, they do it through such articles,” said Kawer.

By contrast, he saw different treatment occurred in Papua. For example, the police arrested the perpetrators in Papua only one day after the incident happened, but they got Mak Susi two months later.

Related to this issue, Kawer asks all political elites and civil authorities in Papua to aware of the racism issue. It is time for all parties to fight racism, especially when it happens in law enforcement institutions.

“If not, it would turn to human rights violation because it occurs in massive and structured ways. While we focus on its impacts, the perpetrator who triggered the incident can go easily. Furthermore, we do not have support from law enforcement,” he said.

For him, the racism incident that occurred in mid-August 2019 should be a momentum for Indonesia to change, to ensure that there would not be racism acts towards Papuans or others in this country.

“Unfortunately, we just wasted this momentum. As a result, racism will continue. We should pay attention to it and must We must agree that it is time to stop racism. People, law enforcement officers, the government must stop racial discrimination against indigenous Papuans or anyone in this country.” (*)