Lectures at Uncen to be Suspended 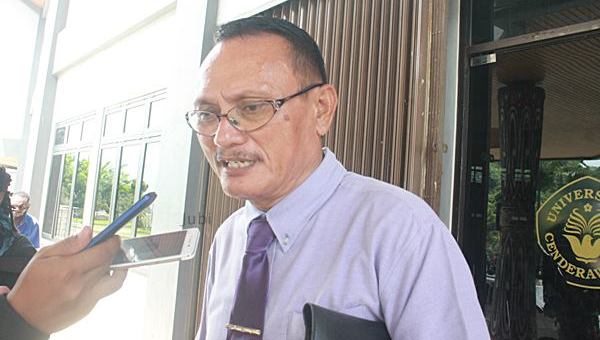 Jayapura, Jubi – Rector of the University of Cenderawasih Jayapura Dr. Onesimus Sahuleka said classes on the campus would be suspended until security could be restored.

“However, as the rector, I am sure that this situation would be safe and in order. I also guarantee that my colleagues would perform their duty properly. What they have done is for the solidarity as well as for their safety as lecturers,” he said on Tuesday (31/5/2016).

He also declared that all lecturers of the university actually have the high willingness and commitment to teaching, but then 628 lecturers and 321 administration staffs finally decided to do a strike following the violence towards some lecturers by some students during the demonstration.

“There is disappointment among lecturers due to the incident yesterday. In fact, I said they have willingness and commitment for teaching and lecturing the students,” said Dr. Onesimus Sahuleka at the University of Cenderawasih Auditorium to reporter on last weekend. According to him, he always said to the students to not barring the campus that harm their selves at the end.

“Do not often ban the campus. Lectures have willingness to educate all students at this university,” he said. He further said this solidarity movement by lectures was following the beating incident towards some lecturers as well as stone throwing over a lecture of the Faculty of Teaching and Pedagogy who should take the medical treatment in Bandung because his eye injury couldn’t be handled in Papua.

“It’s unbelievable! They did it to their own father,” said Sahuleka.

Regarding to the guard by the Police, he said the Campus Authority does not sign the MoU with Papua Police but they agreed to secure the situation in this campus ahead to SBMPTN (Student Selection) on Tuesday (31/5/2016).

“Therefore we asked the Police to guard the situation until 3 June 2016,” he said.

When asked about the request of protesters about local selection for students, he asserted that he often repeated to the protesters that the University of Cenderawasih would always put the indigenous Papuan students as priority. “Furthermore in this local selection, we certainly prioritize the indigenous Papuan students, and I have proved it in 2015. How could they exaggerate it and turn it to be like this. Papuan students to get the University of Cenderawasih is my priority,” he said.

“Their request to extend the SBMPTN registration refers to what rule? It couldn’t, because it’s already closed there (at national level). But take it easy, there is a local test. That’s our authority,” he said.

Since 23 to 27 May 2016, dozens of student from SM3P (Student Solidarity for Papua Education) of the University of Cenderawasih held the demonstration at the University of Cenderawasih Auditorium in Jayapura City. They urged the Ministry of Research, Technology and Higher Education to prioritize the indigenous Papuans in the registration of new students for the period of 2016/2017.

Samuel Wamsiwor in his oration said the Minister of Research, Technology and Higher Education and the University of Cenderawasih to immediately change the registration method of SMNPTN and SBMPTN, because not all students mastering the information and communication technology while both SMNPTN and SBMPTN should be accessed online.

“Our friends at the remote and coastal areas in Papua do not know how to use the online registration. It is difficult to access the internet for them at the remote area,” he said. (Abeth You/rom)