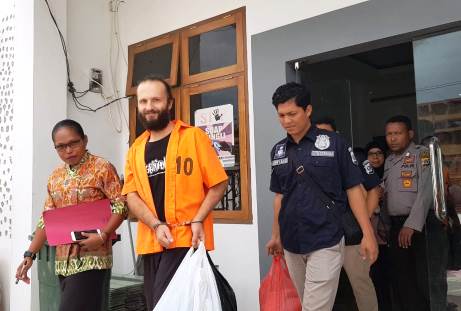 Wamena, Jubi – the Legal team of a Polish tourist Jakup Skrzypski who detained by Jayawijaya State Attorney Office requested the trial of his client to

A member of Skrzypsky’s legal advisors Yance Tenoye said he hoped the trial could be conducted immediately, however, the lacking number of judges in Wamena District Court could not make it happened.
“Regarding the number of judges in the court, we do know it because we had the circular. However, as legal advisors, we hope it can do immediately,” Tenoye told Jubi in Wamena on Thursday (29/11/2018).
Moreover, he said this trial is critical because his client has detained at Jayawijaya Regional Police Prison. ”Since the beginning, the legal team has objected our client to be detained at the police station, because it’s not feasible. Our client should get the same treatment as others who detained in the correctional institution,” he said.
“So far, our client is fine. With the addition detention time, it expected that before 21 December 2018 we can have the information,” he said.
Meanwhile, a spokesperson for Wamena District Court Class II Imelda Indah said that currently her institution only has three judges. Therefore it affects the process of every trial.
“It’s not only his trial is suspended. There are more than 100 cases that led only by a single judge,” he told reporters in Wamena on Monday (26/10/2018).
She also admitted that currently, she is still waiting for the arrival of new judges so that the case involving the Polish need to postpone before taking to the court.
In the meantime, the Head of Jayawijaya District Attorney Office Togar Raflion confirmed the extension of Skrzypski’s detention until 21 December 2018  due to a trial delayed.
“Last week we wanted to delegate this case to the court. However, after consulting with the court, they stated they lacked judges,” he said in his office.
As a result, the prosecutor’s office has extended Skrzypski’s detention period for the next 30 days. (*)
Reporter: Islamic Adisubrata
Editor: Pipit Maizier
amunition Jakub OPM Polish tourist