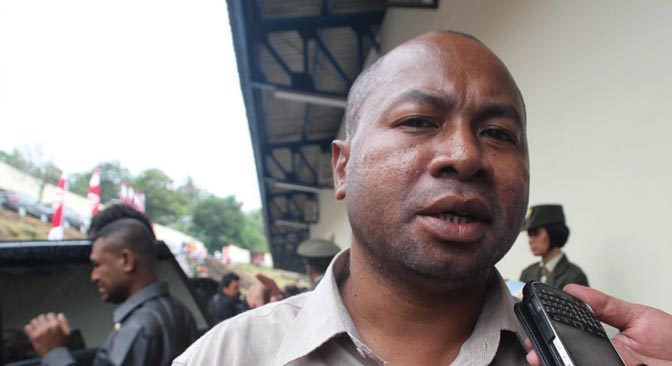 Nareky is accused by a police officer as protects the perpetrators of the Cenderawasih University lecturer’s murder last week that occurred in Waena Campground area.

Nareky’s family said he had been hit on the face and his lips severely wound. He was also detained by the police, and received insults, even though Nareky acted cooperatively and want to help the police to reveal murder of the lecturer. Nareky also got pressured to not reveal the incident he experienced to the public.

“We have reported this to Papua human rights defenders,” said this Nareky family, without mentioning when Nareky experienced the violence, Sunday (May 21).

Head of Komnas HAM Office of Papua Representative, Frits Ramandey confirmed what happened to his staff

“Nareky was taken to the Police related to the development of Uncen lecturer murder case. Police suspect the perpetrators ran into Narek’s house,” said Ramandey.

While Jayapura City Police Chief, AKBP Tober Sirait to Jubi said, they have already 20 witnesses questioned related to the cases of violence. But they continue to deepen the case.

“We will check on it first. At the disclosure of the case we have examined more than 20 witnesses. Some acted cooperatively, others not, “said Chief Sirait, (*)

Yanto Gombo, a young Papuan painter who started off by a hobby