King of Cycloop Did Not Turn Himself In, but Arrested 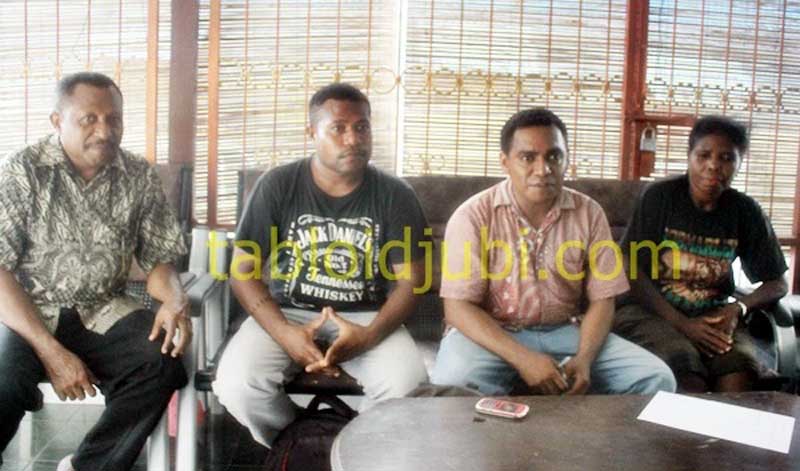 Jayapura, Jubi – Adrianus Apaseray, or known as King of Cycloop, did not surrender himself to authorities but was ambushed by troops and Jayapura residents on Sunday (20/9/2015) , his wife said.

Hermelina Meokbun told Jubi on Monday (21/9/2015) that the ambush occurred on Saturday (19/09/2015) when she and her family had a gathering at a neighbor’s house.
“We had a small party at our neighbor’s house. We were eating, drinking and talking as usual. But when we wanted to go home, soldiers came breaking the door,” she said.

She further said the soldiers shouted: “Do not run, or we’ll shoot you’. “Listened to them, bapak (Adrianus Apaseray) did not run. Then, people led by Yongsu Spari Village Chief also entered to the house. They beat bapak and Pak Okto (Apaseray’s friend who also been in the house). So, the soldiers arrested bapak suddenly,” she said.

She said that the soldiers let the residents beat the two men till night without intervening.
“A lot of people were involved and the victims were bleeding because they were hit in their faces,” she said.

And tomorrow, she said, on Sunday (20/9/2015), “At around 06:00 Papua time, the soldiers took bapak to the forest to find the assembly guns, bullets and bomb. Bapak have handed those stuffs, two guns, bullets, bombs and matches. Then they took him from the forest to the village,” she said.

Then, she said his husband was taken from the village at 09:00 Papua time to Yongsu to go to Dormena Village by motorboat. From Dormena, he was brought to Doyo by car. “I think they want taking him to Sentani Police Station, but they took him directly to Cenderawasih XVII Regional Military Command. So, now bapak is still at Kodam. And I want to confirm that bapak was arrested by soldiers, not surrender.” she said.

In the same place, member of Lawyer Association/Human Right Advocate for Papua, Imanuel Arumayom, said the association regretted the arrest because it’s not proper by law. “This ambush, according to us, is wrong. Furthermore, there’s no letter of order,” said Arumayom.

According to him, regarding to this issue, the Police should handle this arrest. Becasuse, he said, Adrianus Apaseray is a civilian. “Military should be in their domain. But when Military came into domain of civil, it is a violation,” he said.

He also expressed his regret on some coverage in line with this ambush by national media reporters in Jayapura (Papua) that he thought not appropriate with the fact on the ground. “We also regret the coverage by mass media, in particular national media in Jayapura, namely Kompas and Antara that said Pak Adrianus Apaseray surrendered himself. We denied it because it’s not true. He wasn’t surrender but was ambushed,” he said. He also added he’s ready to escort Apaseray if there would be a legal process. “We want the legal process could be transparent and opened, and appropriated with the existing rule and regulation,” he said.
Family Version of Raid Chronology :
Saturday, 19 September 2015, 21:00 Papua time, the soldiers from Jayapura/1701 District Military Command come to the house of Adrianus Apaseray, known as the King of Cycloop, where located in Yongsu Spari Village, Ravenrara Sub-district, Jayapura Regency. From night till dawn, Adrianus Apaseray was beaten by villagers in a neighbor’s house.

At 09:00 Papua time, the soldiers with two arrested men, Adrianus Apaseray and Oktovianus were brought to Yongsu and went to Dormena by motorboat.

Meatballs Trigger A Shot by A Police Officer

New autonomy region is a sexy issue in the political year

GEMPAR asked Chief of Police office to realize his words