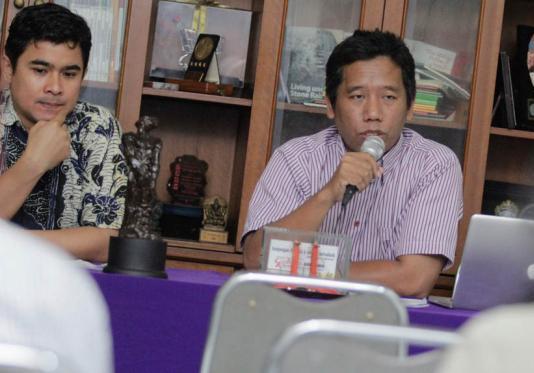 Jayapura, Jubi – The International Federation of Journalists (IFJ) joins its affiliate Aliansi Jurnalis Independen (AJI – Indonesia) in strongly criticizing the actions of local police in Indonesia, in two separate incidents where journalists were harassed and attacked. The IFJ and AJI demand an immediate investigation into both incidents.

On December 1, Topilus B Tebai, editor of majalahselangkah.com, was covering the preparations to commemorate the declaration of West Papua independence in Nabire in West Papua. Topilus was taking pictures of police vehicle inspections at the Heroes Cemetery. A police officer, allegedly claiming to be a police leader, kept distracting Topilus. Shortly after two other officers came over to Topilus and stopped him, asking for his camera. The officers continued to question Topilus and one officer tried to kick the journalist. Topilus told the officers he was a journalist and showed his press card, however the officers then started yelling and demanded to speak with the editor-in-chief of majalahselangkah.com.

On the same day, Archicco Guilianno of ABC Australia and Step Vaessen of Al Jazeera were covering a rally organized by Papuan students in Jakarta when they were attacked and intimidated by local police. According to AJI police asked Guilianno to erase her footage of the rally, however when she didn’t immediately comply but identified herself as a journalist, she was beaten by an officer. Vaessen recorded the incident and was then requested by police to delete the footage, when she didn’t comply police forcibly removed the footage.

Suwarjono, AJI president said of the incident in Jakarta that: “The violence suffered by the two journalists in the demonstration is evidence that the police have not been fully aware of the duties of journalists. Indonesia has ratified the International Covenant on Civil and Political Rights, police must understand the Convention, in order to avoid such an event again.”

Victor Mambor, AJI Papua chairperson said of the incident in West Papua that: “The police chief must educate their officers to understand Indonesia Press Law. Most violations against journalist in West Papua happen to Indigenous Papuan journalists. This incident is a case of police discrimination.”

In November, the IFJ participated in the second IPMI, which visited Jayapura in Papua, Makassar in Sulawesi and Jakarta. The mission met with local journalists, civil society groups and government ministers to discuss the challenges for press freedom in Indonesia. Read the IPMI statement here, with a full report to published soon.  (*)

PAPUAN LIBERATION CONFERENCE GROUPS TO BE HELD IN VANUATU