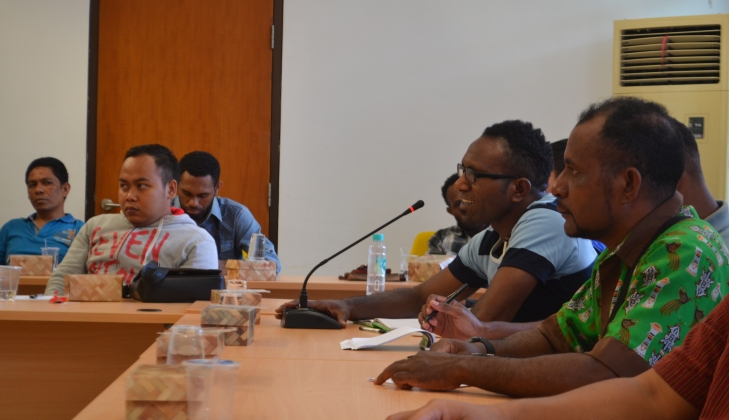 The discussion themed Central and Regional Governments Synergy in Governance of Papua at Faculty of Social and Political Sciences UGM on Friday (10/2/2017) - ugm.ac.id

The discussion themed Central and Regional Governments Synergy in Governance of Papua at Faculty of Social and Political Sciences UGM on Friday (10/2/2017) – ugm.ac.id

Jayapura, Jubi/ugm.ac.id – President Joko Widodo is expected to open a representative office of the government in Papua to support the acceleration of development in the province. This emerged in a discussion themed Central and Regional Governments Synergy in Governance of Papua at Faculty of Social and Political Sciences UGM on Friday (10/2). Attending the discussion was Deputy Head of Presidential Staff, Jaleswari Pramodhawardani. It was led by Dr. Bambang Purwoko, MA.

“The Government should open a special representative office in Papua because we see the synergy between the central and regional governments is weak,” said UGM Graduate School student, Tri Sulistyanto. Tri also suggested the central government to appoint a figure from Papua to be the Indonesian representative at international forums in order that he can explain accurate information regarding the development of Papua so that it is not “being tempted by other countries to separate itself from the Unitary State of the Republic of Indonesia.”

Support to the ideas for a representative office came from Karpus Belau, 22, Papuan student studing at UST Yogyakarta. He said the slow development in Papua was due to security, limited HR, weak bureaucracy, and unsettled past human right abuses. “I think the establishment of a representative office in Papua can observe human right abuse and government policy that does not take side with the local people,” he said.

Jaleswari Pramodhawardani said President Joko Widodo has always been committed to conducting development through fair economy for Papua by way of infrastructure construction, improved services in health and education, and settlement of human right abuse. But, said Jaleswari, the government also deals with weak coordination from the region and between institutions. “Our job is to secure the President’s policy so that the program for Papua is really implemented by the related ministries,” she said.

Jaleswari described the Human Development Index in Papua year 2015 increased to 57.25 from 56.57 in 2014. In education area, as many as 325,617 students have received the Smart Indonesia program while 60 percent or 2.836 million Papuans have received the Healthy Indonesia. “In terms of human right, there have been clemencies given to five political prisoners,” she said. On infrastructure, the government has built as long as 4,480 km of new roads and increased markets to 25 from only 3. Vendors also increased from 23 thousands in 2015 to 39 thousands in 2016. (*)

Indonesia Should Penalize Reporters for Biased News on Papua: Journalist