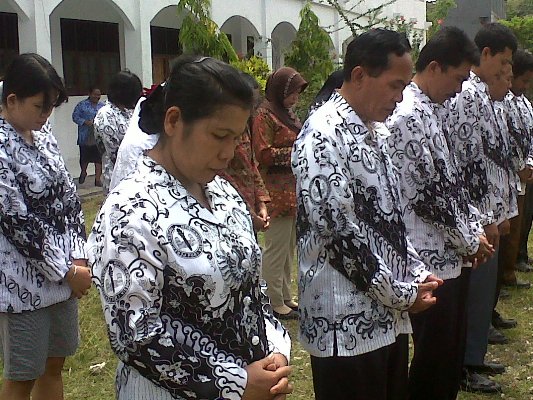 Jayapura, Jubi – Officials at the Jayapura Municipal Education Office have been accused of blackmailing teachers while administrating their promotions and accreditation, said a teacher on his Facebook account.

“Some fraud has been found related to promotion for many reasons, including target employee and Accreditation Team,” said teacher of SMA 1 Jayapura, Robert Sihombing on his Facebook.

On his Facebook, he further revealed several points of findings, and he stated several culprits who indicated as perpetrators were reportedly replaced to the Papua Provincial Education Office, but they are still taking a role.

At fifth point, Sihombing wrote to teachers who feel being squeezed in this matter to contact him privately through in box or SMS to his mobile +6281248387877.

“Do not let the teachers become the blackmail victims of the education office culprits,” he said. When asked the question from Jubi through Facebook, Robert Sihombing said this practice has occurred for quite long time.

In response to this matter, the Head of Jayapura Municipal Education Office I Wayan Mudiyasa declined the blackmail practice by his subordinates. He advised teachers who feel being blackmail by some education culprits to report it by bringing the authentic evidence in writing.

“We have clarified the case of Mr. Sihombing. He was an administration staff and he might have a good credits. He also should have the Akta 4 certificate. It is a long time case, and it was occurred because he didn’t coordinate with us,” said Wayan on Wednesday (25/5/2016).

He admitted he already confronted all parties related to Robert Sihombing case and it’s over now.

“We help him for his promotion. I asked him to show the culprits that I can take an action if it was proven. I don’t want to harm the teachers and their rights for promotion. I will help all teachers if they were in difficulties,” he said. (Sindung Sukoco/rom)

Some Elementary Students in Biak Unable to Read

No Schooling for Children of Yakyu Village For Almost Nine Years

Papua Governor to Give Award to Pregnant Women