Jayapura, Jubi – One morning, two arts students were already hard a work to finish 1,800 shawls hand drawn and hand painted with Papuan motifs to welcome the 20th National Games or PON XX in Jayapura, which will be held in October 2021.

The games were supposed to be held in October last year, but the pandemic forced the committee to postpone it for a year.

Domi and Risni, students from Indonesian Arts and Culture Institute (ISBI) in Jayapura, were helping Blandina Ursula Ongge to finish the souvenirs. Blandina has worked hard to make the shawls since October last year. She made two designs: a large shawls of 2 meters by 30 centimeters, and a smaller one of 1 meter by 16 centimeters.

On the shawls, she designed a cenderawasih or bird of paradise and oyster shell motifs. Risni then copied her design on the shawls with her hands, which took an hour to finish. And then Domi then applied some wax on the drawings using “canting”, a tool usually used in batik. This could take them half a day to finish.

Blandina said she decided to craft the shawls because it would be light to carry around and take home as souvenirs. “I think people from outside Papua would want to return home bearing some souvenirs from Papua, unique ones. So I prepared some light souvenirs that would not burden them,” she said.

Domi and Risni would paint the motifs with bright colors, yellow, blue and brown, using a brush and a stick with a cotton bud at the end. They would dry the shawl, which would take the whole daym, and then they would apply the wax on the drawings before dyeing the cloth. They would then wash and boil the shawls to peel off the wax. The finishing process is to iron the shawls and package them.

Blandina said the motifs were from Sentani: buttefliess, oyster and tifa or traditional percussion, a boat and “yoniki”. “Yoniki is a fish tail, used by Sentani customary leaders or ondoafi. In the past, only ondoafi children could use the motif,” she said.

“Nowadays, everyone could use the motif,” she said.

So far she had made dozens of shawls and even sold about 20 pieces. She planned to make 1,000 large ones and 800 smaller ones. She said she ordered the supplies from Yogyakarta and she got help from her relatives and five ISBI students.

She got Rp 50,000 profit margin for each shawl. She calculated if all ran according to her plan, she would get Rp 330 million in sales revenue. She is selling the shawls on Facebook and Instagram, through their online shop called “Rasa Tuna”, managed by Papuans in Jakarta. She said she was still in talks with Jayapura administration and the local military command to get permission to open a stall in the official venue of PON XX. 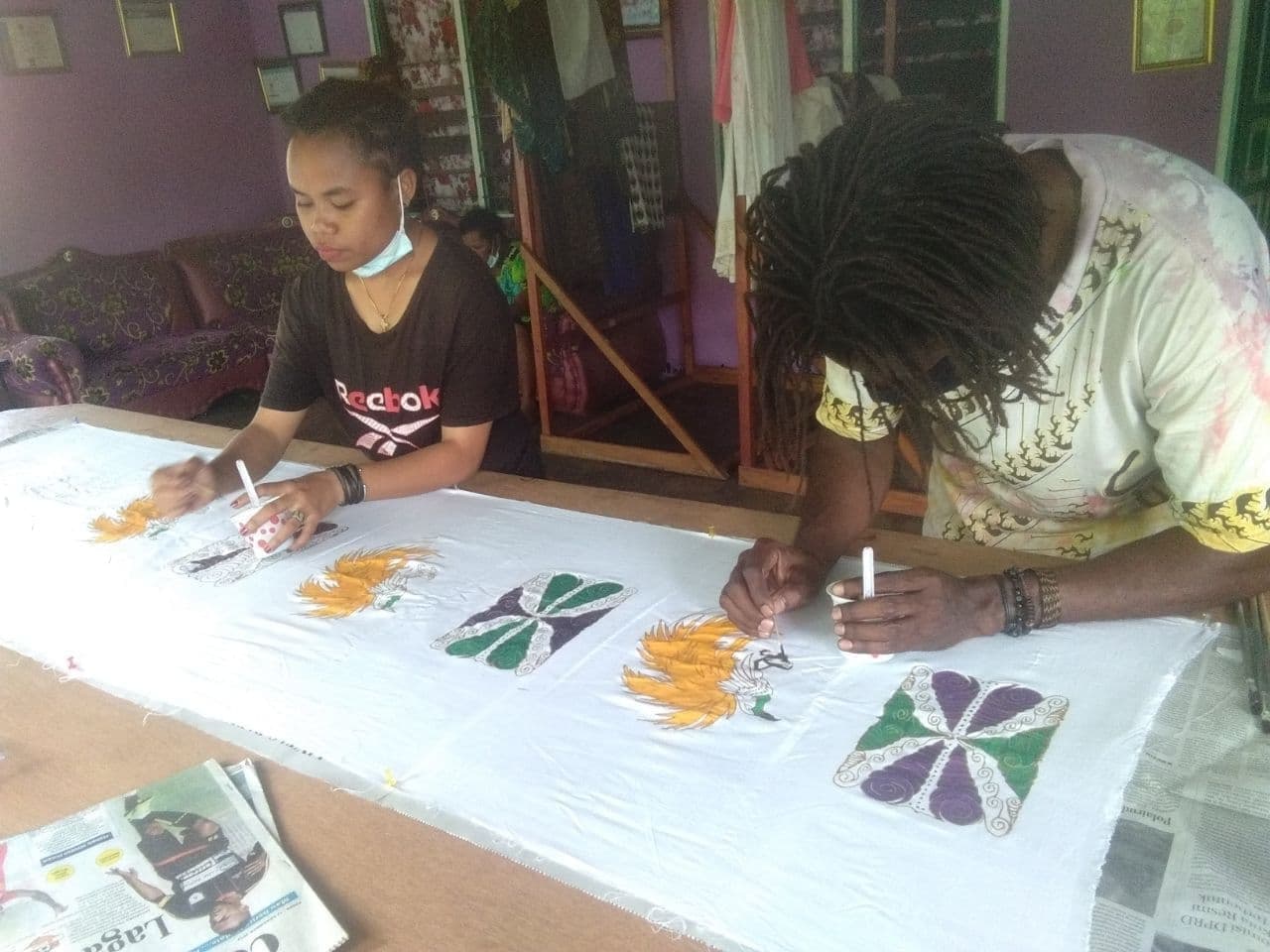 Two art students draw and paint motifs on a shawl designed by Blandina Ursula Ongge to welcome the national games or PON XX in Jayapura in October 2021. Credit: Jubi/Theo Kelen

Other artisans in Jayapura also crafted some souvenirs on her own. Susana Rumbsumbre Tjoe has made batik cloth especially for the games. She said the uniqueness of the batik was in the motifs, which were “warrior from Kampung Nafri” motif and Port Numbay motifs like turtles, cendewasih and tifa.

Another enterprising local artisan to ride the PON XX wave was Beni Rumbiak. He had made key chain for PON XX souvenirs since three months ago. He had a design for each sport competing in PON XX.

He based his design on the official mascots of PON XX, announced by the national committee in August 2019. The mascots are Papuan tree kangaroo and bird of paradise, called Kangpho and Drawa.

The key chains Beni made from PVC pipes, paints and feathers had both mascots posing as a soccer player, volley player, badminton athlete or a boxer.

He had made them in the past three months and had produced 100. He planned to increase production until 3,000 pieces before the PON XX. He got help from eight family members. To make one key chain, a person needs an hour.

He planned to sell one key chain for Rp 100,000 per piece, but he said people could bargain with them. He had opened an online shop in Instagram, called Wadomu Art, managed by his daughter, Maya Rumbiak. They also have a gallery in Kelapa Dua Market in Entrop, Jayapura.

He said he did not expect to get an official stall at the venue. He said he would just hawk his souvenirs.

Andris Wakum, from Biak, has also made some key chains for PON XX souvenirs. He used coconut shells for the material.

He shaped the keychains with local motifs like cenderawasih, frogs, crocodiles, owls and tribal chief.