Jayapura bishop: PGGP demo is not against ‘Papua Merdeka’ 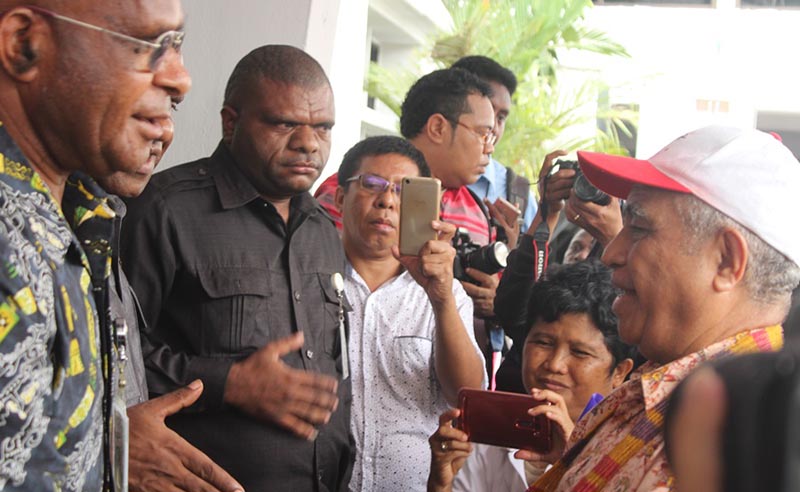 Three from eight demands of the action are support for Pancasila, NKRI and Bhineka Tunggal Ika and the dissolution of the reactionary organization such as Hizbuth Tahrir Indonesia (HTI), Islamic Defenders Front (FPI) and Ichwanul Muslimin. They also asked for Ahok, Jakarta governor charged with blaspemy, to be released.

Criticism against the bishop

The day before the action was held, a number of activists, church leaders and youth who are also Catholics criticized the attitude of Bishop Leo and PGGP. They consider the bishop to see a distant problem but turn a blind eye to the reality before him. The bishop is seen as not taking sides with his people in Papua and reducing the struggle against discrimination and racism to the struggle of state ideology.

John Djonga, Pastor and human rights activist in Papua said the PGGP action led by the bishop only disappointed the Papuans. “If the action only to save the Unitary State of Indonesia Republic (NKRI) in Papua, so what about the victims of human rights violations?” said John Djongga.

Jayapura Bishop as chairman of PGGP was considered to keep silent about the social problems facing Papuans.

Catholic youth, Soleman Itlay said there are still many other things that the church must strive for, for example, education and health issues of Papuans.

“As a bishop, he never spoke when Papuan got cruel treatment from the security forces. As chairman of PGGP of Papua he never speak for defending people in Papua who had been experience state violence, including education and health issues of his people,” he said.

Bishop Leo after reading the statement stressed that churches participation to ‘save Indonesia and save Pancasila’ in order to fight radicalism that already exist in the land of Papua.

According to Bishop Leo, the demonstration was a mirror of consolidation against those who wanted to change the country ideology.

“Precisely at the moment there is a radical group in Papua, that is why we held a demo, to loud the voice. To make people aware the radicalism is in Papua. So the point is, we are not against the struggle of Papua Merdeka (Papua freedom). But we call attention again that we are almost endangered by radicalism,” Bishop Leo said.

Meanwhile, Yunika, a resident of Jayapura City who participated in the demo said her participation was moved by Ahok figure, which is free from corruption and a churchgoer.

“I like Ahok because he is a churchgoer and anti-corruption. Ahok did no wrong but imprisoned,” she said.(*)

GOVERNOR URGES SOCIETY TO MAINTAIN SECURITY AND STABILITY AHEAD OF ELECTIONS.