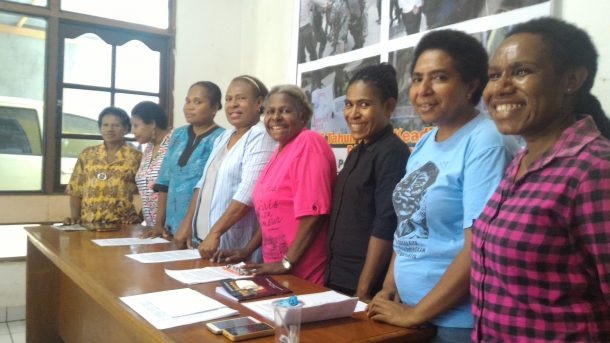 Jayapura, Jubi – A team that formed by the Government and involved three indigenous Papuans to investigate human rights abuses is not representing the Papuan people’s voices and aspirations, human rights activists said.

Its formation was also seen deviated for the proper mechanism and full of political interests, said Zandra Mambrasar from the Institute for Human Rights Study and Advocacy (Elsham) Papua together with the Solidarity of Papuan Women Human Rights Defenders in the press conference held on last week.

She said this country already had the National Human Rights Commission, which its task is to resolve the human rights issues in Indonesia, including in Papua and Papua Barat provinces. Therefore, resolutions to all human rights issues must go through this institution.

“If the Government wanted to resolve the problem, it should be done through proper mechanism. Therefore, the National Human Rights Commission should take this responsibility instead of the new team launched by the Ministry of Political, Legal and Security Affairs. It’s very political. The process was supposedly done through the National Human Rights Commission, and then followed by the investigation by Prosecutor Office before taking to the Court. That’s the mechanism,” said Mambrasar.

Meanwhile the human rights commissionaire Imdadun Rahmat said the commission was authorized to resolve several cases of violence occurred in Papua that categorized as severe human rights violations, namely Wasior case (2001), Wamena case (2003), Paniai case (Desember 2014) and one that is still on propose, Biak case (July 1998). Deadline for the investigation team by the Government is until October 2016.

The working team that has four months to resolve alleged human rights violations in Papua has raised protest from other human rights activists in Papua. Besides questioning their work mechanism, the presence of three Papuans in the team took people’s attention.

Papuan human right activist Frederika Korain who also a lawyer, said in this meeting that the team launched by the Ministry of Political, Legal and Human Rights activists by involving three Papuans was only a game and not indicate the good intention of Government to resolve many problems in Papua.

“It seems the message is there are Papuans who get a place of honor in this country, while it is merely a game created by the Government to cover the real situation occurred in Papua. Moreover those people named themselves as activists. We must be strict on this. Those people who included in the team have no capacity, not competent in term of resolving the problem,” asserted Korain.

She’s also pessimistic the team could resolve the cases.

“How could the country that conducted violations want to solve its own violations? For the country, it is not possible.”

Human rights activist Bernadetha Mahuse who’s also a teacher said no more trust to the Government to uphold the justice over the alleged human rights cases in Papua, including to the new launched team.

She said in order to save the next generation of indigenous Papuans, she and other Papuan women human rights activists urged the fact-finding team from the Pacific Island Forum with the Indonesian Government to come to Papua immediately.

“We urge the fact-finding team from PIF to immediately come doing their investigation in Papua to endorse the humanity values,” she firmly said.

“We are the women who bring the life and it is our duty to maintain the life; well maintain it and keep it to be sustained for the life of our children in this land,” she said.

According to Mahuse who works over 15 years as human rights activist, “our womb, our land of Papua has been damaged, has been torn by the interest of the Government with its policies and investments on the land. Number of investors came for the companies’ profits, not for the people’s sake. And it has been occurred for years without any resolution. “Our trust is decreased every single day,” she said. (Yuliana Lantipo/rom)

The court should avoid labelled of Indonesian colonialism tool

Juffa wants to give Oro land to West Papuans

A sad story of education from Papuan outreached and border areas