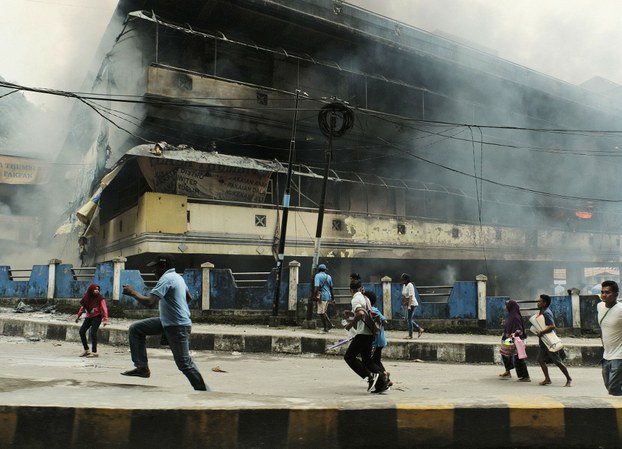 Papua, Jubi – Indonesia imposed an internet blackout to restore order in its easternmost Papua region on Wednesday, officials said, during a third straight day of unrest sparked by the perceived harsh treatment of anti-Jakarta protesters by government security forces.

Demonstrators torched several stalls at a market and a few buildings in Fakfak, a regency in West Papua province, and more than 1,000 policemen were deployed to the region on Wednesday, national police spokesman Muhammad Iqbal said.

“The ministry decided to temporarily block telecommunication data services starting Wednesday until the situation in Tanah Papua returns to normal,” the Ministry of Communication and Information Technology said in a statement, using the local term for Papua and West Papua provinces, which make up the Indonesian half of New Guinea island.

Tensions rose when local residents who rallied outside the Fakfak regent’s office on Wednesday clashed with a rival group of protesters armed with machetes and iron bars, local resident Freddy Warpopor told BenarNews.

Security forces could do little because they were far outnumbered, he said.

“Members of the local community wanted to voice their aspirations to the regency chief, who promised to convey their message to President Joko Widodo,” Warpopor said.

During the rally in Fakfak, the crowd chanted, “We are not Red and White [the colors of the Indonesian flag]. We are the Morning Star [the banned Papuan separatist banner],” witnesses said.

Iqbal, the police spokesman, said 1,200 officers had been deployed to West Papua from neighboring provinces. More than 300 soldiers also arrived in the province on Tuesday to beef up security.

“We are talking to community and religious leaders,” Iqbal told reporters. “Soldiers and police are not being equipped with live ammunition.”

He insisted that things were under control, especially in Manokwari regency and Sorong city, the scenes of violent protests on Monday and Tuesday.

On Friday, dozens of people were injured when Papuan students who were demonstrating and calling for self-determination clashed with counter-protesters in Malang, a city in East Java province, police and Papuan activists said.

The next day, anti-riot police fired tear gas on a Papuan students’ dormitory in Surabaya, East Java’s main city. They arrested and briefly detained 43 people there over accusations that they had desecrated an Indonesian flag, local media reported.

In response, thousands marched in Papua and West Papua provinces on Monday to protest the alleged racist treatment by security forces and residents against the Papuan students.

Protesters in Manokwari, the capital of West Papua, attacked the provincial parliament and set fire to several other government buildings, including the provincial House of Representatives, police said.

Also on Monday in Sorong, a crowd set fire to a section of a prison, prompting a riot that led to the escape of more than 250 inmates, officials said. Most of the escapees remain at large, police said.

No violence was reported in Sorong on Wednesday, but protesters submitted a petition to the mayor demanding that the government act against non-indigenous Papuans who used racist slurs.

“The protesters also demand that the mayor limit the growth of the non-indigenous population, because all this time the influx of outsiders has been out of control,” a local resident, Poly Way, told BenarNews.

The petition urged the president, Joko “Jokowi” Widodo, to visit and apologize to the Papuan people in person, he said.

A low-level separatist conflict has been taking place since the 1960s in Papua, where the population is predominantly Melanesian. Papua declared its independence from Dutch colonial rule on Dec. 1, 1961, but that was rejected by the Netherlands and later by Indonesia

In 1963, Indonesian forces invaded the region and annexed it. In 1969, the region held a referendum in which security forces selected slightly more than 1,000 people to agree to Papua’s formal absorption into the nation, according to human rights advocacy groups.

Violence has been on the rise in Papua after separatist rebels allegedly killed 19 members of a crew working on a government road project and a soldier in Nduga regency.

In response to the killings, the government sent additional 600 troops to Nduga.

The anti-insurgency campaign has forced more than 20,000 Nduga residents to flee to the forest and neighboring regencies to avoid being caught in the violence, local rights and church activists said.

At least 182 people had died of hunger and disease after fleeing, they said. (*)