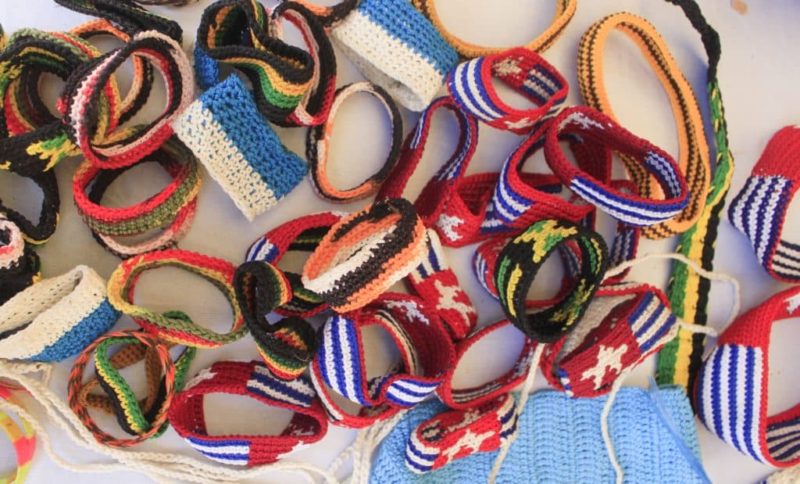 Previously, the security forces reportedly forbid Papuan women from selling any Morning Stars-patterned accessories during the event as they were considered a resistance symbol against the state.

Nari said the police should not be afraid of a pattern. “It’s just a pattern,” she said. “None of these mamas [Papuan women] weave the pattern as a way to go against the state. If anything, it’s our identity as Papuans,” she told Jubi on Tuesday, October 5, 2021.

She further reminded that Papuan women had been making noken with various patterns for a long time, including the Morning Star pattern, even before the National Games.

“It has nothing to do with the event. It’s common to find accessories with the Morning Star design made by Papuan women. And they do not do it out of force, it’s simply a part of their identity that cannot be forgotten and let go,” Nari said.

Nari added that these women had supported their families through knitting and making accessories. “It’s their livelihood. We, Papuans, know it by heart,” she said.

Meanwhile, MRP chair Timotius Murib said he had received information that residents and supporters wearing clothes and accessories with the Morning Star pattern were not allowed to enter the National Games venue

“Some people who wore bracelets or clothes with the Morning Star pattern were forbidden from watching the games. Whereas, these accessories are common and not just worn by native Papuans,” said Murib.

Murib hoped that the security forces would not overreact to the phenomenon. “Don’t overdo it, it’s just an accessory. Let’s create a good atmosphere during the PON XX and make it a successful event,” he said.

President Jokowi to Keep His Promise to Papuan Women Traders