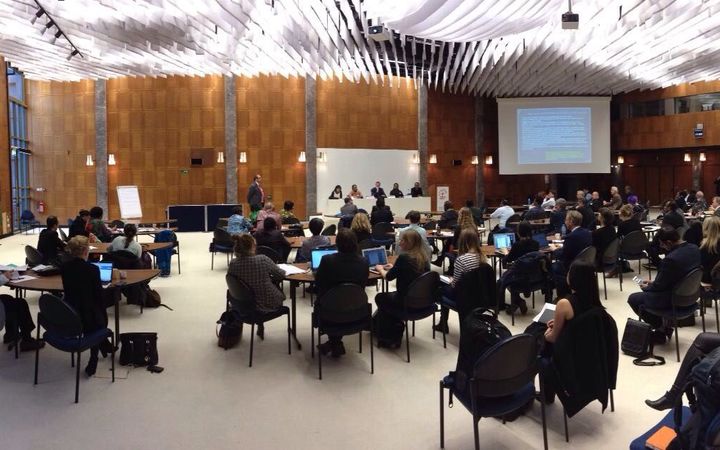 Nabire, Jubi – International Academics for West Papua (IAWP) is a
network that was started in 2016 by a group of academics concerned
about the ongoing human rights abuses in West Papua, will launch its
European region branch this month.

IAWP welcome academics from all countries and all disciplines. The aim
of the network is t to express extreme concern about the prevalence of
human rights abuses carried out by Indonesian security forces in West
Papua.

It was officially launched in the Australia-Pacific region on
September 1 at the University of Sydney’s conference, ‘Beyond the
Pacific: West Papua on the World Stage’, hosted by the West Papua
Project.

The ribbon was cut by West Papuan leader, Jacob Rumbiak, to an
audience of Papuans and their international supporters. It also
included and welcome the network’s new patrons, Dr Benny Giay and
Professor Noam Chomsky.

The European branch of the International Academics for West Papua is
set to launch on Wednesday November 15 at the British Houses of
Parliament in 4:30PM Grimond Room, Portcullis House.

The branch will be launched during an introductory meeting of the
All-Party Parliamentary Group on West Papua, a cross-party group of
MPs and Lords which seeks to promote West Papuan self-determination
and human rights at a high political level.

The launch will feature talks from several academics and researchers
on issues from British foreign policy in West Papua to the thorny
issue of a proposed independence referendum.
It will be joined by parliamentarians, activists, journalists and
legal professionals.

Below is IAWP official open letter launched in September 2016, as well
as it platform of foundation:

Open letter to the Government of Indonesia

We academics from around the world express extreme concern about the
prevalence of human rights abuses carried out by Indonesian security
forces in West Papua.

Since 1969, the Indonesian army has routinely fired into non-violent
demonstrations, burned down villages and tortured civilian activists
and bystanders.

Despite being routinely barred from the provinces, independent
observers like Human Rights Watch, Amnesty International and Tapol
have all documented severe and endemic human rights violations by
Indonesia across West Papua. Indonesian special forces and
counter-terrorism units like Kopassus and Detachment 88 – trained by
Western countries – are implicated in beatings, extra judicial
assassinations and mass killings.

Such a heavy military presence, combined with racism and structural
economic discrimination against the indigenous Papuan population, can
only result in conflict and abuse.

We therefore call upon the government of Indonesia and our own
governments to take urgent and effective action to ensure that:

• The Indonesian military swiftly withdraws from West Papua and that
Indonesia demilitarise the region as a first step towards a peaceful
resolution to the conflict;
• Indonesia releases political prisoners and allows international
media, NGOs and observers into West Papua;
• The international community takes a firm stance on human rights
abuses in West Papua and calls for Indonesia to respect the Universal
Declaration on Human Rights and the International Covenant on Civil
and Political Rights, to which Indonesia is a party.
• Military and police training and arms exports for Indonesia are
terminated until human rights abuses in West Papua cease, including
Australian, American, British, Canadian, Dutch, New Zealand, training
and funding of the Indonesian police’s counter-terrorism unit,
Detachment 88, at the Jakarta Centre for Law Enforcement Cooperation.
• Indonesia and the International Community recognize the historic
injustice of the 1969 ‘Act of Free Choice’, by which the population of
West Papua was denied its right to self determination and coerced into
joining Indonesia, and that they take steps to address the historic
injustice in a manner supported by the majority of Papuans.

Patani to Learn from Papua Movement Activists on Diplomacy: Activist

Ruben Magay : Foreign Press Restriction to Papua is An Attempt Against the Law

MSG Chair has Officially Received the Membership Application from ULMWP