This report includes analysis of the context of violence in Intan Jaya regency, in particular between Indonesian Military (TNI) and the West Papua Liberation Army (TPNPB), which has been happening at the expense of civilians in the regency. This is the second from the series published in jubi.co.id.

One Saturday in September last year, residents of Kampung Hitadipa in Hitadipa district in Intan Jaya Regency, Papua, were summoned by the local military command. They came, scared and tense, to the yard of a private school belonging to a Protestant denomination called Gereja-gereja Injili. The school had been “occupied” by the Indonesian Military (TNI) as the preparatory Hitadipa Military Command (Koramil).

Some of the officers from the Koramil accused the residents of hiding their SS1 assault rifles that went missing since Sept. 17, 2020. The SS1 were taken by West Papua Liberation Army (TPNPB) in an attack that killed Chief Sgt. Sahlan from TNI.

The TNI, however, accused the civilians of hiding the rifles.

Pastor Yeremia Zanambani was not present at the preparatory Koramil because he and his wife, Miriam Zoani, had gone since the morning to Bomba, a small kampung in the foot of the hills south from Kampung Hitadipa. They were tending to their fields and repairing their pig pens.

“Since Friday night, my husband said he wanted to help me on Saturday to tend to their fields because on Monday he would be away to do his [church] duty. On Saturday, Sept. 19, my husband and I went together to the field where our pig pen is located. My husband fixed the fence at the pig pen while I dug to plant sweet cassava. While we were working, we heard shootings at about 1 pm from the direction of Hitadipa. When we heard that sound, we entered the pig pen and closed the door, because TNI told us, whenever we heard shootings, we had to get into the house and lock the door,” said Miriam to Humanity Team on Oct. 23. 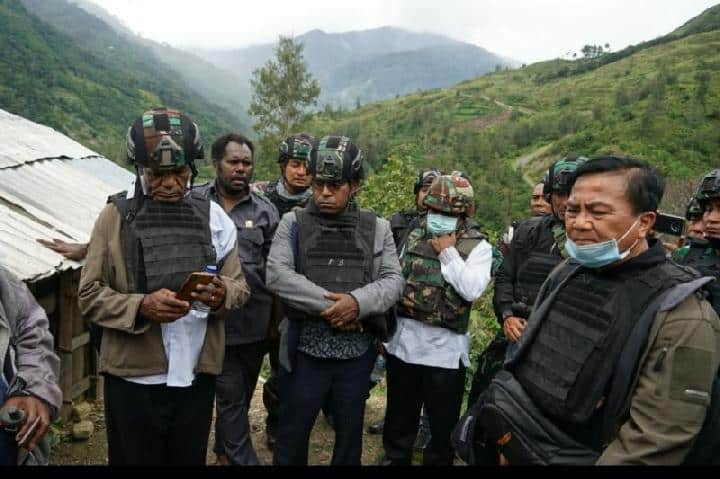 The shooting Miriam heard was from shootings when TPNPB attacked the preparatory Koramil. TPNPB killed First Pvt. Dwi Akbar Utomo, a soldier sent from an infantry battalion in Gorontalo province to help guard the Koramil.

The attack prompted TNI to search for TPNPB soldiers by sifting through a small kampung called Taundugu. The series of events ended with the shooting of Pastor Yeremia Zanambani.

Only a day after the shooting, the spokesperson of United Command of Area and Defense (Kogabwilhan) III, Col. IGN Suriastawa rushed to make a statement that TPNPB had killed Yeremia. “They were trying to seek attention because there would be a UN General Assembly at the end of this month,” he said as quoted by CNN Indonesia.

Read also: Papua Customary Council: Intan Jaya was in chaos after the deployment of Indonesian Army

Yeremia was a respected religious figure in Papua. He was a former head of Kemah Injil Indonesia Church (GKII) in Hitadipa district. He was also the headmaster of Theology Academy in Hitadipa and advisor for GKII in Region 3. He was a linguist as well, having translated the Bible from Indonesian to Moni language, the language of Intan Jaya community.

“He served two congregations. First in Bahtera Church in Janamba, and second in Bulapa. He was in the Indonesian-Moni translation team so he traveled al lot to Nabire (nearest biggest city). He was a teacher at a High Theology School in Sugapa. He was with the family and children only on Friday, Saturday and Sunday,” said Miriam.

Others in Papua tried to get more information about the killing. They collected testimonies from witnesses that Yeremia was allegedly killed by TNI soldiers, not TPNPB.

A series of events

Yeremia’s murder preceded by events that began on Oct. 25, 2019, about a year before, when TPNPB allegedly shot three motorcycle taxi (ojek) drivers in Hitadipa. Since then, people died and Yeremia was the 14th person who died in the string of conflicts.

Since the ojek drivers killing and Yeremia’s, at least 10 civilians were reported killed and eight injured. Meanwhile, four TNI soldiers died in Intan Jaya during that period.

Yeremia was not the last victim. Bible teacher from Emondi Stasi under Timika Diocese, Agustinus Duwitau, was allegedly shot by TNI on Oct. 7, 2020. Duwitau was injured and had to be hospitalized.

Read also: A story of Zaki, a teacher from Aceh who dedicated his life for education in remote Intan Jayapura, Papua (Part 1)

On Oct. 26, 2020, a TNI soldier allegedly shot Rufinus Tigau, another Bible teacher from Bilogai Parish of Catholic Church under Timika Diocese, in Kampung Jalai in Intan Jaya. Rufinus did not survive.

The shootings at the expense of civilians’ lives showed that TNI failed to control their operation against TPNPB so it would not civilians. So far, the TNI soldiers who were accused of shooting the civilians never went on trial. Only one case in which the TNI’s military police took action, which was the arson of a health agency official house in Taundugu. The Military Police named eight soldiers a suspect in the arson.

As of early November in 2020, hundreds of civilians in Hitadipa District and other districts had fled their homes and became displaced people. Since Sept. 19, Miriam had yet to return to her home in Kampung Hitadipa and she never visited her husband’s grave.

“We cannot go home. We’re still scared because TNI soldiers were there. We want to them out of there so we can go home. We feel threatened because they had used threatening language to us and the church. We find it hard to return home. Up until now, I don’t know where they buried [Yeremia]. We go around confused, we don’t know where our home is. We don’t know, is it safe for us to go home or not,” said Miriam.