The Indonesia’s poorly handled diplomacy toward the small Pacific states 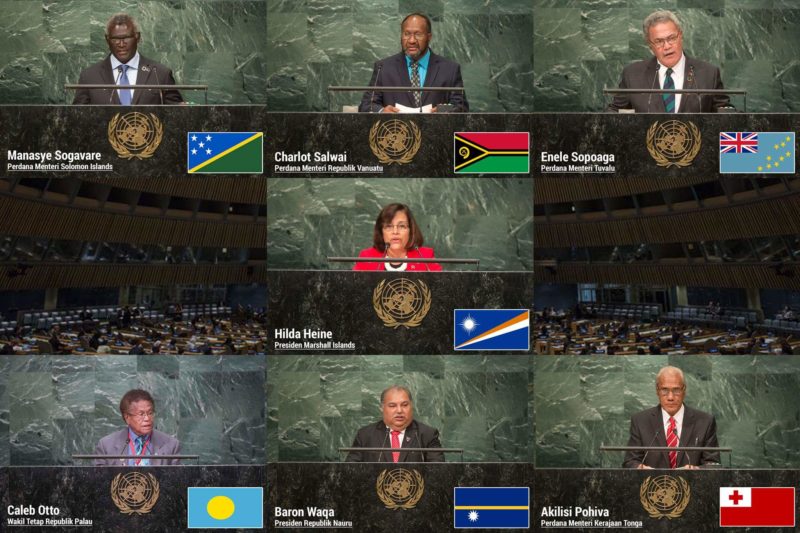 INDONESIA’s stance on Papua at the UN General Assembly in New York last month recalled its firm denials of human rights abuses in East Timor in the late 1990s. Pacific countries, including the Marshall Islands, Nauru, Palau, Solomon Islands, Tonga, Tuvalu and Vanuatu, had expressed concern over human rights conditions in Indonesia’s easternmost provinces, Papua and West Papua. Solomon Islands Prime Minister Manasseh Sogavare, for example, said: “Human rights violations in West Papua and the pursuit for self-determination of West Papua are two sides of the same coin.” This attention to Indonesia’s human rights record in Papua prompted nationalistic responses back home, with local media making a star of diplomat Nara Masista Rakhmatia for standing up to the audacious Pacific upstarts (link is external) and accusing them of interfering in Indonesia’s domestic affairs.

What happened at the UN General Assembly was more than just a symptom of ongoing disagreements between the Indonesian government and Pacific countries over human rights abuses and the “internationalisation” of the Papua issue. It was also an example of Indonesia’s poorly handled diplomacy toward the small Pacific states. Defensive Indonesian statements about sovereignty and territorial integrity do nothing to address the humanitarian issues that are, in fact, the primary concerns of state and non-state actors in the Pacific.

The past six years have seen a growing political movement questioning the 2001 Law on Special Autonomy for Papua, the increasing influence of migrants, multinational and national companies, and the massive security presence across the Papuan provinces. There has been an unprecedented mobilisation of citizens in peaceful protests in support of Papuan self-determination, largely coordinated by local student groups (link is external) and civil society organisations, such as the National Committee for West Papua (KNPB). The response of the security forces has been harsh and repressive, and has involved arbitrary arrests, torture and even killing of indigenous Papuans. In one of the most prominent examples over recent years, police arrested thousands of Papuans in a peaceful pro-independence celebration in May (link is external).

On the international stage, the Indonesian government pretends these recent developments have not occurred. Its claims of improvements in human rights and democracy completely ignore the situation on the ground. In addition to reports from international organisations like Human Rights Watch, even the Coordinating Ministry of Politics, Law, and Security Affairs has acknowledged human rights violations in at least three cases (link is external): the Wasior incident of 2001, the Wamena incident of 2003, and the Paniai shooting of 2014. Although endeavours to resolve these cases have stalled, the government is at least prepared to admit to a domestic audience that human rights problems exist.

The inconsistency in how Papuan issues are represented is the result of the lack of a coordinated policy between the Ministry of Foreign Affairs and other related agencies about how to defuse the Papua issue. There has been no attempt to coordinate the approach on the ground with the policies and information presented to the international community. The Ministry of Foreign Affairs appears, however, to be on a public relations offensive, with its representatives in Australia regularly posting insipid infographics (link is external) about development in Papua, with facts like “30,000 Papuan football supporters flew the Indonesian flag”.

Similarly, the Indonesian representative at the UN claimed that the allegations of human rights abuses against Indonesia were untrue, and that Pacific countries supported the separatist cause without acknowledging infrastructure development (link is external) in Papua. These blunt arguments lack any substance about the historical, political, economic and security conditions in Papua and subsequently do little to counter allegations of human rights abuses.

The Papua issue also demonstrates how Indonesian diplomacy towards Pacific countries has failed. The small Pacific states are constrained by an international system that favours major powers. To overcome their small size and influence, Pacific countries need to band together and raise their concerns in multilateral forums for their voices to be heard. Human rights issues in Papua have been high on the agenda at recent regional forums, such as the Melanesian Spearhead Group (MSG) and the Pacific Island Forum (PIF), which wrapped up its 2016 meeting last month. Indonesia is an associate member in the MSG and a dialogue partner in PIF. At an earlier MSG meeting, the Solomon Islands and Vanuatu proposed sending a fact-finding mission (link is external) to investigate rights abuses in Papua. This call was repeated at the PIF meeting last year.

Increasing attention to Papua in these forums has been driven in part by the United Liberation Movement for West Papua (ULMWP). Despite being a nongovernmental organisation, ULMWP has observer status in the MSG, and is considered by many to represent the voice of Papuans. The MSG delayed a decision on granting ULMWP full membership earlier this year, although there are strong signs that it will be offered (link is external) at the next meeting in December 2016.

The Indonesian diplomatic response to the internationalisation of the Papua issue has been largely reactive – and has included ad-hoc development assistance to Pacific countries, such as Fiji and Papua New Guinea. The government sponsored a grouping of the five “Melanesian” provinces in Indonesia – Papua, West Papua, Maluku, North Maluku and East Nusa Tenggara – dubbing it “Melindo” and provided support for the Melanesian Arts and Culture Festival to be held in Kupang in 2015.

These were transparent attempts to convince Pacific counties about Indonesia’s commitment to Melanesian heritage across the country, even though the majority of people in East Nusa Tenggara, Maluku, and North Maluku do not share as strong a sense of belonging to Melanesia as do indigenous Papuans. In any case, these efforts have proved ineffective in persuading fellow Pacific societies to defuse the Papua issue in the international arena.

Moreover, many Indonesian diplomats lack the skills to contain the Papuan independence campaign in the Pacific. Diplomats must have the capacity to establish networks at multiple levels, not only with fellow diplomatic officers, but also NGO activists, political leaders, community members at the grassroots – even Papuan self-determination activists – if there are to be supportive discussions on the Papua issue.

Indonesia’s rejection of the Pacific countries’ fact-finding team proposal – without offering to provide comprehensive human rights reports of its own – has raised questions about Indonesia’s role in and commitment to tackling problems in Papua. There is no point in simply telling other countries to stay out of the Papua issue (link is external). After all, the Indonesian government cannot conceal the truth about human rights violations in Papua. That would only provide ammunition for Pacific countries to continue to raise the Papua issue in international forums.

The Indonesian government needs to stop accusing Pacific countries of undermining its sovereignty and start working on finding common ground to resolve the Papua issue.

This article was published in http://indonesiaatmelbourne.unimelb.edu.au

Pacific Forum Leaders: Ready to Champion West Papua where the UN has Failed

The Political Situation in the Province of Papua and West Papua