Indonesia’s political system has ‘failed’ its minorities – like West Papuans 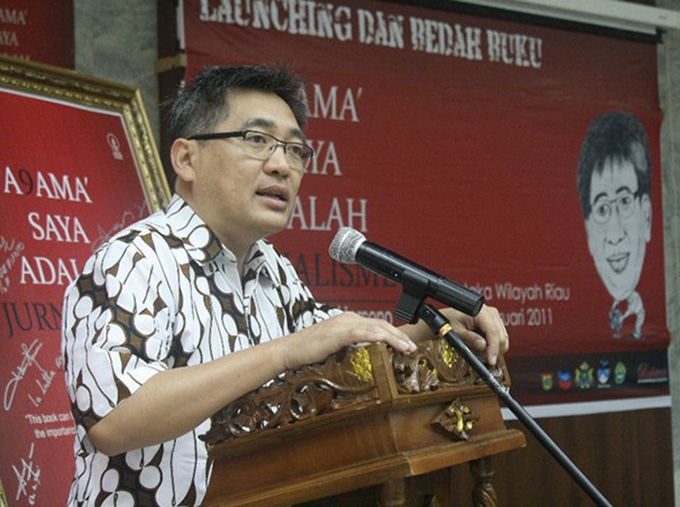 A human rights defender and researcher has warned in a new book published on the eve of the Indonesian national elections tomorrow that the centralised political system has failed many of the country’s 264 million people – especially minorities and those at the margins, such as in West Papua.

Author Andreas Harsono also says a “radical change is needed in the mindset of political leaders” and he is not optimistic for such changes after the election.

Harsono is author of Race, Islam and Power: Ethnic and Religious Violence in Post-Suharto Indonesia, a book based on 15 years of research and travel between Sabang in Aceh in the west and Merauke in West Papua in the East.

Founding President Sukarno used the slogan “from Sabang to Merauke” when launching a campaign – ultimately successful – to seize West Papua in 1961.

But, as Harsono points out, the expression should really be from Rondo Island (an unpopulated islet) to Sota (a remote border post on the Papua New Guinean boundary.

Harsono, a former journalist and Human Rights Watch researcher since 2008, argues that Indonesia might have been more successful by creating a federation rather than a highly centralised state controlled from Jakarta.

“Violence on post-Suharto Indonesia, from Aceh to West Papua, from Kalimantan to the Moluccas, is evidence that Java-centric nationalism is unable to distribute power fairly in an imagined Indonesia,” he says. “It has created unnecessary paranoia and racism among Indonesian migrants in West Papua.

“The Papuans simply reacted by saying they’re Melanesians – not Indonesians. They keep questioning the manipulation of the United Nations-sponsored Act of Free Choice in 1969.”

Critics and cynics have long dismissed what they see as a deeply flawed process involving only 1025 voters selected by the Indonesian military as the “Act of No Choice”.

Harsono’s criticisms have been borne out by a range of Indonesian activist and watchdog groups, who say the generals behind the two presidential frontrunners are ridden with political interests.

These retired officers are beholden to political interests and the prospect of resolving past human rights violations will “become increasingly bleak” no matter who is elected as the next president.

Kontras noted that nine out of the 27 retired officers who are behind Widodo and Ma’ruf have a “problematic track record on human rights”.

“Likewise with Prabowo Subianto and Sandiaga Uno where there are eight retired officers who were allegedly involved in past cases of HAM violations”, said Kontras researcher Rivanlee Anandar.

Prabowo himself, a former special forces commander, is implicated in many human rights abuses. He has been accused of abduction and torture of 23 pro-democracy activists in the late 1990s and he is regarded as having knowledge of the killing hundreds of civilians in Santa Cruz massacre in Timor-Leste.

Harsono’s 280-page book, with seven chapters devoted to regions of Indonesia, documents an ”internally complex and riven nation” with an estimated 90,000 people having been killed in the decade after Suharto’s departure.

“In East Timor, President Suharto’s successor B. J. Habibie agreed to have a referendum [on independence]. Indonesia lost and it generated a bloodbath,” says Harsono.

“Habibie’s predecessors, Megawati Sukanoputri and Susilo Bambang Yudhoyono, refused to admit [that] the Indonesian military’s occupation, despite a United Nations’ finding, had killed 183,000 people between 1975 and 1999.”

Harsono notes how in 1945 Indonesia’s “non-Javanese founders Mohammad Hatta, Sam Ratu Langie and Johannes Latuharhary wanted an Indonesia that was democratic and decentralised. They advocated a federation.”

However, Sukarno, Supomo and Mohammad Yamin wanted instead a centralised unitarian state.

“Understanding the urgency to fight incoming Dutch troops, Latuharhary accepted Supomo’s proposal but suggested the new republic hold a referendum as soon as it became independent. Sukarno agreed but this decision has never been executed.”

The establishment of a unitarian state “naturally created the Centre”, says Harsono. “Jakarta has been accumulated and controlling political, cultural, educational, economic, informational and ideological power.

“The closer a region to Jakarta, the better it will benefit from the Centre. Java is the closest to the Centre.

“The further a region is from the Centre, the more neglected it will be. West Papua, Aceh, East Timor and the Moluccas are among those furthest away from Jakarta.”

Harsono also notes how centralised power has helped a religious and ethnic majority that sees itself as “justified to have privileges and to rule over the minorities”.

The author cites the poet Leon Agasta as saying, “They’re the two most dangerous words in Indonesia: Islam and Java.” Muslim majority and Javanese dominance.

Harsono regards the Indonesian government’s response to demands for West Papuan “self-determination” as “primarily military and repressive: viewing Papuan ‘separatists’ as criminals, traitors and enemies of the Republic of Indonesia”.

He describes this policy as a “recipe for ongoing military operations to search for and destroy Papuan ‘separatists’, a term that could be applied to a large, if not overwhelming, portion of the Papuan population”.

“The Indonesian military, having lost their previous power bases in east Timor and Aceh, ruthlessly maintain their control over West Papua, both as a power base and as considerable source of revenue.

Pro-independence leaders have called on West Papuans to boycott the Indonesian elections tomorrow.

Andreas Harsono launched his journalism career as a reporter for the Bangkok-based Nation and the Kuala Lumpur-based Star newspapers. In the 1990s, he helped establish Indonesia’s Alliance of Independent Journalists (AJI) – then an illegal group under the Suharto regime, and today the most progressive journalists union in the republic.

Harsono was also founder of the Jakarta-based Institute for the Studies on the Free Flow of Information and of the South East Asia Press Alliance (SEAPA).

In a separate emailed interview with me in response to a question about whether there was light at the end of the tunnel, Harsono replied: I do not want to sound pessimistic but visiting dozens of sites of mass violence, seeing survivors and families’ who lost their lost ones, I just realised that mass killings took place all over Indonesia.

“It’s not only about the 1965 massacres –despite them being the biggest of all– but also the Papuans, the Timorese, the Acehnese, the Madurese etc.

“Basically all major islands in Indonesia, from Sumatra to Papua, have witnessed huge violence and none of them have been professionally understood. The truth of those mass killings have not been found yet.” (asiapacificreport.nz)

Professor David Robie is director of the Pacific Media Centre.