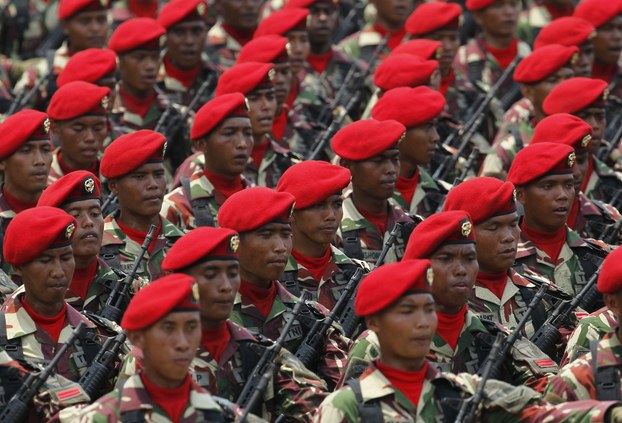 Papua, Jubi – The elite Indonesian army unit Kopassus will train again with the American military, the Southeast Asian nation’s defense chief said Thursday, in the strongest sign that Washington has agreed to improve ties with the special forces group accused of past human rights abuses.

Defense Minister Ryamizard Ryacudu made the announcement after meeting in Jakarta on Thursday with acting U.S. counterpart Patrick Shanahan, during which the two agreed to boost bilateral military cooperation, including on counterterrorism and maritime security.

“Enhancing cooperation will be in the form of dialogue forums, visits by high-ranking military officers, more TNI [Indonesian military] cadets attending education in the U.S., and training for rangers and special forces,” Ryamizard told reporters.

In a joint statement, the two sides affirmed support for normalized relations with Kopassus, which is short for “Special Forces Command” in Indonesian. A joint exercise was expected to take place in 2020, it said.

“Both ministries affirm support for the expansion in our army to army exercise next year, and by normalizing the Army special forces relationship beginning in 2020 with a Joined Combined Exercise Training with KOPASSUS,” the statement said.

A Pentagon spokesman did not immediately respond to a BenarNews email seeking details on the joint training exercises. But Lt. Col. Dave Eastburn, a U.S. Defense Department spokesman, told Reuters that the training program was still in its initial stages and would likely be for up to six weeks.

Shanahan’s predecessor, James Mattis, last year pushed for expanding training for Indonesian military units involved in counter-terrorism, including Kopassus, which gained notoriety after its members were accused of rights abuses during the 1990s in East Timor, when it was occupied by Indonesia.

Kopassus personnel have also been accused of committing atrocities in hotspots in Indonesia, including Aceh province on Sumatra island and Papua, the country’s easternmost region.

In 2010, Washington lifted a more than a decade-long ban on military assistance to Kopassus, arguing that the unit had undergone sufficient reform following the fall of authoritarian ruler Suharto in 1998.

Last year, Indonesia’s National Commission on Human Rights, known as Komnas HAM, said Kopassus members were involved in rape, killings, enforced disappearances and torture between 1989 and 1998, describing those accusations as crimes against humanity.

“The crimes were borne out of the policy to impose a military emergency in Aceh at that time,” Komnas HAM team member Mohammad Choirul Anam told a news conference in Jakarta last September.

“We have enough preliminary evidence that crimes against humanity, such as rape and other forms of sexual violence, murder, deprivation of freedom, forced imprisonment and forced disappearances,” he said.

Congress began implementing the so-called Leahy Laws in 1998, cutting ties with Kopassus the following year over allegations that its forces had killed civilians and committed rights abuses in East Timor as well Aceh and West Papua provinces.

In Jakarta on Thursday, Shanahan told reporters that he and Ryamizard had discussed growing “our capacity and our level of cooperation.”

“The first is expanding, increasing our complex training exercises,” the acting American defense secretary said. “There are many things that we share in common in terms of threats – or I will consider opportunities – our ability to work in counter-terrorism, our ability to work on maritime domain awareness.”

Last year, as Mattis was preparing for his Jakarta visit, Sen. Leahy described Kopassus as a “criminal enterprise” under Suharto, and said it was unclear whether the elite unit had completely transformed.

“The question Secretary Mattis needs to answer is whether the Indonesian government has punished the Kopassus officers who ordered and covered up those horrific crimes, and whether members of Kopassus today are accountable to the rule of law,” the senator told reporters at the time.

On Thursday, the two countries also agreed to tackle threats to security in the Asia-Pacific region, including those posed by returning nationals who fought alongside Islamic State (IS) fighters in Syria and Iraq, the Indonesian defense chief said.

IS-linked militants from Indonesia and the Philippines had been implicated in recent terrorist attacks in both countries, Ryamizard said.

“We must also pay attention to Rohingya refugees. They must be … humanized, otherwise, terrorists will be waiting in the wings to persuade them to join their ranks,” Ryamizard said.

Shanahan was in Indonesia on the first leg of an Asian tour, which will take him to Singapore, where he is scheduled to speak at the Shangri-La Dialogue regional security and defense forum.

Ryamizard said he would attend the forum and talk about maintaining stability and resilience in the face of threats in Southeast Asia.

The region will be stronger and more stable if the countries with combined populations of 560 million people are united, with the support of the United States and partners including Australia, China, India, Japan, New Zealand and Russia, Ryamizard said.

Concerns that ex-IS militants returning from Syria would become leaders of independent terrorist cells not affiliated with pro-IS militant groups in Indonesia have not yet become a reality but remains something to worry about, according to a recent report by a Jakarta-based think-tank.

“At present, the biggest threat comes from IS supporters who have never left, not from those who returned,” Sidney Jones, director of the Institute for Policy Analysis of Conflict (IPAC), said in a report published last month.

Ryamizard also said the U.S. had an interest in making the South China Sea accessible to all.

“Indonesia understands that it must maintain peace and cooperation between countries such as joint patrols so that all countries can go through (the South China Sea),” Ryamizard said.

In December, the Indonesian military inaugurated a military unit in the Natuna islands near the South China Sea.

Indonesian navy patrols have clashed with Chinese fishing boats in waters off Natuna in recent years, as the nation has increased a crackdown on illegal fishing in the maritime region and accused the Chinese of fishing in the country’s Exclusive Economic Zone.

China responded by calling the waters traditional fishing grounds. Tensions between China and its neighbors have risen as the superpower has sought to assert its control of the South China Sea in the face of competing territorial claims from countries in the region.

China claims most of the sea as its own, while Vietnam, Taiwan, the Philippines, Malaysia and Brunei have overlapping claims to territories. (Benarnews.org)