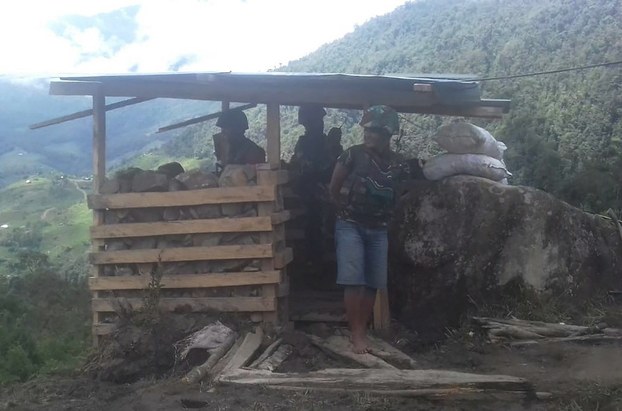 Papua, Jubi – Three government troops and at least one rebel were killed in a shootout Thursday when scores of guerrillas attacked soldiers who were guarding the construction of a major highway in far eastern Indonesia’s Papua province, the military said.

The attack in Nduga regency took place a few days after the Indonesian armed forces (TNI) announced the deployment of 600 additional soldiers to the area to safeguard the completion of the Trans-Papua Highway project. Construction was disrupted in early December when separatist rebels killed 19 members of a crew working on the project in Nduga, military officials said.

In Thursday morning’s incident, two dozen soldiers who were assigned to provide security for the project came under attack from a large group of rebels in Mugi, a district of Nduga, said Muhammad Aidi, spokesman for the Indonesian military command in Papua.

“There was a sudden attack by about 50-70 people armed with various weapons, including military-standard weapons and traditional weapons such as arrows and spears,” Aidi told BenarNews.

The body of one suspected insurgent was found on the site, but soldiers believed that more rebels may have died in the encounter because the insurgents had left weapons at the scene, Aidi said.

“We saw them carry their members who were shot,” he said.

Aidi said the attackers were believed to be members of a Papuan rebel faction led by Egianus Kagoya.

The group, which calls itself the West Papua National Liberation Army (TPNPB), claimed responsibility for killing the 19 construction workers three months ago. The rebels claimed at the time that the workers were members of the military’s engineering detachment.

TPBPB spokesman Sebby Sambom denied that any rebels were killed in Thursday’s clash.

The blazes attracted the attention of TPNPB members, who immediately went to the location, Sebby said.

“We pursued TNI members. We received a report that five TNI members were killed in the clashes. On our side, no one was killed,” Sebby told BenarNews.

The dead body found by the soldiers belonged to a civilian, Sebby said, identifying him as 52-year-old farmer Amiri Nimiangge.

“The body has nothing to do with the gunfight,” Sebby added.

Elsewhere in the troubled mineral-rich province, an activist with the West Papua National Committee, Victor Yeimo, called for a referendum on self-determination in Papua to resolve the conflict peacefully.

“We are urging the U.N. Human Rights Commission to come Papua. Indonesia must have the political will so that the conflict in Papua can be resolved peacefully and democratically through a referendum,” Yeimo said.

Laurens Kadepa, a member of the Papuan legislative council, said soldiers faced a difficult situation because separatist rebels mixed in with the local population and had to deal with difficult terrain.

“I deplore the deaths of TNI members and civilians. This violent conflict must be stopped immediately,” Kadepa said.

Earlier this week, the military said it was sending 600 reinforcements to Nduga to resume construction of the Trans-Papua road, after work on the project was halted in the wake of the early December killings of the 19 workers. Following the incident and fighting that ensued then between Indonesian security forces and Papuan rebels, Jakarta sent 154 police and soldiers to Nduga.

The killings of the three soldiers on Thursday was the first insurgency-related fatality on the military’s side since a soldier was killed at Mapenduma airport in Nduga on Jan. 29, when rebels tried to shoot down an airplane carrying Indonesian officials.

Meanwhile, hundreds of Nduga residents still have not returned to their villages out of fear of being trapped in armed clashes between separatist groups and security forces.

A low-level separatist conflict has been taking place in Papua, a region where the population is predominantly Melanesian, since the 1960s.

Papua declared its independence from Dutch colonial rule on Dec. 1, 1961, but that was rejected by the Netherlands and later by Indonesia.

In 1963, Indonesian forces invaded the region and annexed it. In 1969, the region held a controversial referendum in which security forces had selected slightly more than 1,000 people to agree to Papua’s formal absorption into the archipelagic nation, according to human rights advocacy groups. (benarnews.org)

When Sago Forests Make Way for Buildings, Where to Go for Justice?