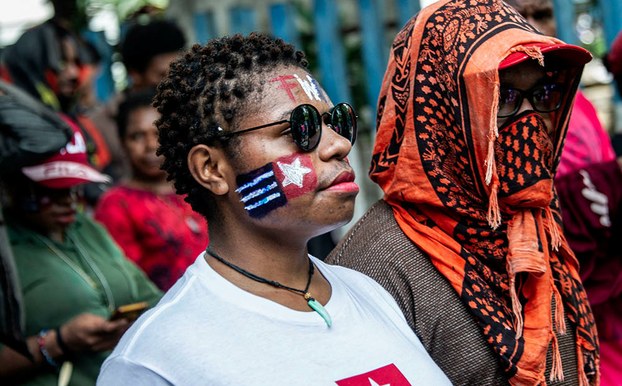 Papua, Jubi – A unity pact struck reportedly by separatist rebel factions in Papua province is an attempt to win public support, the Indonesian military said Friday, while it was still searching for a helicopter that vanished in the region a week earlier with 12 servicemen on board.

The head of the United Liberation Movement for West Papua (ULMWP) announced this week that three rebel groups resisting Jakarta’s forces in the far eastern province had agreed on May 1 to come together and unify militarily under the banner of the West Papua Army.

ULMWP’s claims, however, were “a ploy to gain public sympathy,” said Muhammad Aidi, a spokesman in Papua for the Indonesian armed forces (TNI).

“They’ve been saying that for a long time,” he told BenarNews. “For us, whether they are united or divided is not an issue.”

He added a warning.

“No sovereign country will tolerate separatism. Raising an army is a violation of the law. Not only will they have to face the TNI, but also the entire people of Indonesia,” Aidi said.

“The TNI will continue to assist the police in enforcing the laws in Papua, by looking for and arresting wanted armed criminals who have carried out criminal acts such as the destruction of property, the killing of civilians and other atrocities,” Sisriadi told BenarNews.

“Several important people from the armed criminal groups in Papua have realized their mistakes and surrendered their weapons to the military and promised to work together with the people to develop Papua as an integral part of the Unitary State of Indonesia,” Sisriadi said, referring to rebels.

Search teams, meanwhile, have been out looking every day – weather permitting – but so far have uncovered no traces of the army helicopter that went missing during a flight in remote and densely forested Papua on June 28, Aidi said. Its jungle-clad terrain and limited road networks make air transport vital to the troubled region.

The Russian-made Mil Mi-17 lost contact with ground control a few minutes after lifting off from Oksibil, an administrative center in the mountainous Pegunungan Bintang regency, the military said.

“Still nothing, we have not found any signs of it,” Aidi said, adding that there had been no radio contact with the crew and passengers since the helicopter disappeared.

“There’s still a possibility that the helicopter made an emergency landing. We are still hopeful,” he said.

All 12 people on board were TNI personnel. There was one officer among them, a second lieutenant, according to Aidi.

The crew did not send out any distress signal and officials suspect that bad weather, which can develop rapidly, was a factor. The control tower reported the helicopter missing at an altitude of 7,800 feet (2,400 meters), five minutes after leaving Oksibil, according to the Associated Press.

It had stopped there to refuel while transporting troops and supplies to a border post near Indonesia’s frontier with Papua New Guinea, AP reported.

‘Unity is our strength’

Papua New Guinea is where the three rebel factions – the West Papua Revolutionary Army, the West Papuan National Army and the West Papua National Liberation Army – met in early May and agreed to join forces as a united army against Jakarta rule, according to Benny Wenda, the Britain-based leader of the United Liberation Movement for West Papua.

“This development shows the world that we are ready for independence, ready to form a government free from Indonesian colonialism,” he added.

However, a faction of the Free Papua Movement (OPM) led by Jeffrey Bomanak and its armed wing, the West Papua National Liberation Army (TPNPB), disputed Wenda’s claims about the unity pact.

“The OPM-National Liberation Army is not part of ULMWP. OPM had existed even before there was ULMWP. We are soldiers, while UMWP is a civilian movement,” Bomanak told BenarNews on Friday.

Sebby Sambom, a spokesman for the West Papua National Liberation Army, said his faction was not involved in the congress in Papua New Guinea that led to the declaration of a unified West Papua Army. TPNPB commanders, such as Goliat Tabuni, Egianus Kogoya and Puron Wenda, did not attend that meeting, he said.

“I heard that the extraordinary congress was held in Vanimo (PNG) in May. But we know nothing about it, so we reject all the outcome,” Sebby told BenarNews.

The Papuan armed separatist movement is often seen as being made up of fractious groups, whose fighters lack modern military equipment. Most of their weapons are traditional instruments such as spears, bows and arrows. The few firearms they possess usually are captured from government security forces.

Hipo Wangge, a researcher at the Marthinus Academy think-tank in Jakarta, cast doubts on Benny’s claim about the establishment of a unified rebel army.

“The nature of the liberation [movement] has been fragmented since the 1960s,” Wangge said.

Indigenous teenagers and boys who appear to be barely adolescent were involved in armed separatist groups in Papua, AP reported last month.

Wenda disputed the report and said the separatist movement was “committed to the full implementation of international law, unlike the illegal Indonesian occupation.”

“Since December 2018, over 30 civilian children have been killed in brutal Indonesian bombing raids and ground operations,” Wenda alleged.

The military and police have denied that civilians were targeted in counter-insurgency operations. Human rights groups have accused Indonesian forces in Papua of committing serious abuses with near impunity.

In December, residents of Nduga were forced to flee to escape clashes between the insurgents and government security forces who were sent to capture those responsible in the killings of the workers who were building the Trans-Papua Highway.

The construction of bridges as part of the highway that stretches more than 4,300 km (2,687 miles) from Sorong, the largest city in West Papua province, to Merauke regency has since resumed following the deployment of more than 600 soldiers to secure the project. It is scheduled to be completed later this year.

Papua is one of the archipelago’s poorest regions despite its rich natural resources. It declared independence from Dutch colonial rule on Dec. 1, 1961, but that was rejected by the Netherlands and later by Indonesia.

In 1963, Indonesian forces invaded the region and annexed it, and six years later held a controversial referendum in which, according to rights groups, security forces selected slightly more than 1,000 people to agree to the region’s formal absorption into the archipelagic nation. (Benarnews.org)

No truce nor dialogue unless UN steps in: TPNPB

DISCOVERY OF ANIMAL FOSSILS MAY REVEAL PAST PAPUA

VOTE COUNTING PLENARY CAN NOT BE HELD OUTSIDE YAHUKIMO REGENCY, BAWASLU SAYS