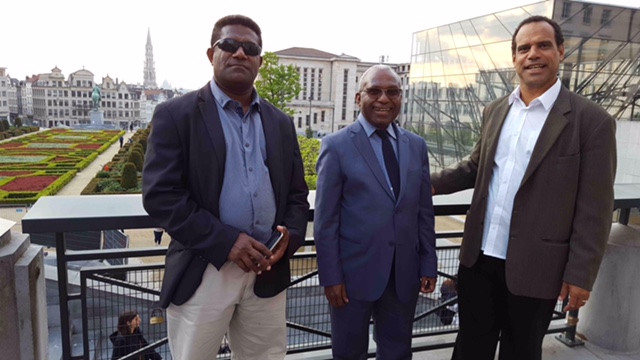 Vanuatu government representatives Johnny Koanapo (left) and Ralph Regenvanu (right) with Octo Mote, the secretary-general of the United Liberation Movement for West Papua, in the middle, in Brussels, May 2017 - Supplied

Vanuatu government representatives Johnny Koanapo (left) and Ralph Regenvanu (right) with Octo Mote, the secretary-general of the United Liberation Movement for West Papua, in the middle, in Brussels, May 2017 – Supplied

The statement condemned Indonesian human rights violations in Papua and called for a resolution supporting the right of West Papuan political self-determination.

However, Indonesia’s embassy in New Zealand says the ACP agreed in April that the group would not cover the issue of Papua in future meetings.

It has rejected reported claims from a Vanuatu minister that African and Caribbean countries support their push for a new Papuan self-determination process.

It said that in its response to Indonesia’s embassy in Brussels, the ACP Secretariat rejected reportage of the Pacific statement, indicating the issue of Papua “did not feature” during the meeting.

Vanuatu’s government envoy Johnny Koanapo was reported to have delivered the joint statement to the Council, warning that “apartheid-like colonial rule” was wiping out West Papuans as a people.

Mr Koanapo has said that the discussion set up the likelihood of a resolution on the full range of West Papua issues at the next ACP ministerial council meeting, scheduled for November.

However the Indonesian embassy has dismissed his statement.

“The argument made by a Vanuatu politician that African countries support self-determination in Papua is false,” said the embassy in a statement.

“As close partners sharing common history and future, Indonesia and Africa have long expressed solidarity and full support towards each other’s sovereignty.”(*)

Melanesian Arts and Culture Festival to Be Held in Kupang