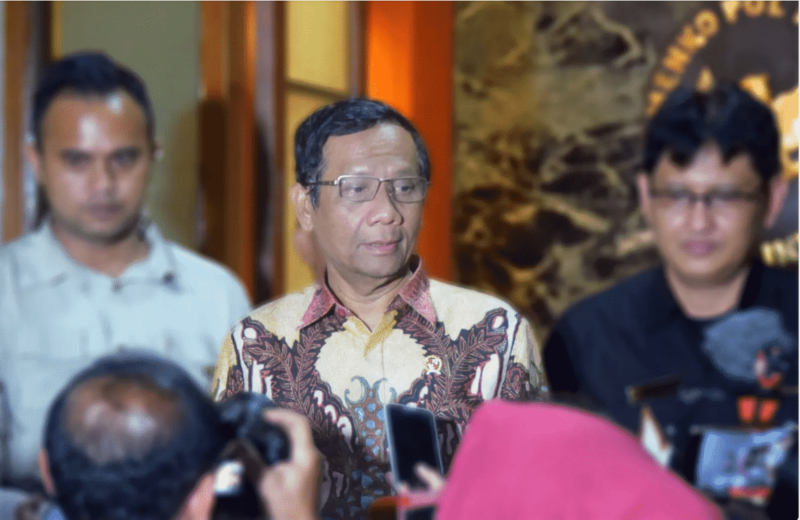 Jayapura, Jubi – The government of Indonesia has declared The West Papua National Liberation Army (TPNPB) a terrorist group but Papua Governor Lukas Enembe was quick to respond, calling for Jakarta to reconsider.

“According to Law No. 5/2018 on terrorism, what is done by the armed criminal group and the people affiliated with it is an act of terrorism,” said Coordinating Political, Legal and Security Affairs Minister Mahfud MD during a press conference on Thursday, April 29, 2021.

“Anyone who plans to mobilize and organize [a movement] using violence is a terrorist,” Mahfud said.

Earlier this week, Indonesia’s State Intelligence Agency (BIN) and House speaker Bambang Soesatyo already called the group a terrorist organization and asked the government to endorse the label, following the death of Papua spy chief Maj. Gen. Anumerta IGP Danny, who got shot by the TPNPB.

When asked about why the government did not take a soft approach in addressing the Papua conflict, such as by negotiating with the armed group, Mahfud said his party had already talked with the Papuan Provincial Council (DPRD) leaders, as well as traditional and religious leaders. “Who says dialogue is hard to do? We continue to have a dialogue,” he said.

Mahfud claimed that the leaders wanted a comprehensive development in Papua. “We are just facing a group of people, not [against] the Papuan people. It will be done according to the law with the TNI and police at the frontline,” he said.

Papua Governor Lukas Enembe urged the Indonesian government to review the determination of the armed criminal group as a terrorist group.

Enembe stated that the Papua Provincial Government agreed that the TPNPB’s actions were against the law and the basic principles of human rights and disturbed the safety of residents. However, Enembe said that labeling the TPNPB a terrorist would have a psychosocial impact on the Papuan people, especially those who lived outside the Papua land.

“We fear that this will create a new stigma for the Papuans living outside Papua,” Enembe said in a written statement on Thursday.

“The Papua Provincial Government demands the Central Government and the House of Representatives to reassess the determination of the armed criminal group as a terrorist group. There must be a comprehensive study which takes into account the social, legal, and economic impacts of the labeling on the Papuans in general,” Said Enembe.

Enembe said that terrorism is a concept continuously being discussed in law and politics. Therefore, Enembe said, the state’s objectivity was needed in granting a group a terrorist label. He also asked the Indonesian government to consult with the United Nations Security Council regarding the matter.

Further, Enembe urged the Indonesian Military (TNI) and police to first map the strength of the TPNPB including its quarters, number of forces, and unique characteristics that describe the group correctly. “We do not want any incident of false arrest and shooting in which the Papuan civilians become victims,” the governor said.

Enembe emphasized that the Papua Provincial Government and the Papuan people remained loyal to the Republic of Indonesia and wanted the central government to use a more humane approach instead of a security approach. “Please prioritize the exchange of words and ideas, not the exchange of bullets,” he said.

The executive director of the Papua Justice and Human Integrity Foundation, Theo Hesegem, lambasted the central government’s move to establish the TPNPB as a terrorist organization as it would only prolong the Papua conflict and add to more civilian casualties.

“So far, the military operation in Papua has taken a toll on the lives of many civilians with many cases of false arrest and shooting. With the labeling of the TPNPB as a terrorist group, I’m afraid more victims will fall. To date, the Papuans took refuge everywhere, living in fear,” Hesegem told Jubi on Thursday. He also feared that Mahfud’s statement would result in the arrest of many civilians suspected as “the TPNPB supporters and affiliates”.

Hesegem reminded the government that the TPNPB was internationally known as a group fighting for its rights to self-determination. “Calling it a terrorist, preceded with the statement by the House speaker which called to exterminate the group while inviting to ‘talk about the human rights later’ will definitely gain a spotlight in the international community,” he said.

Meanwhile, the Commission for Missing Persons and Victims of Violence (KontraS) deemed the labeling of the TPNPB as a terrorist as an attempt to silence the voices in Papua demanding justice.

“The labeling is nothing more than an attempt to silence voices demanding justice in Papua. It will exacerbate the situation in Papua, ” KontraS deputy coordinator Rivanlee Anandar said on Thursday.

Rivanlee said that the labeling could justify a large military deployment to Papua, as well as increasing police brutality in responding to the situation in Papua and adding stigma against Indigenous Papuans who speak up and fight for their rights.

“The state must widen its perspectives in viewing the Papua conflict. The armed conflict is not the main problem but rather, a response to the problem of inequality of access, welfare, and fulfillment of basic rights in Papua compared to other regions in the country,” he said.