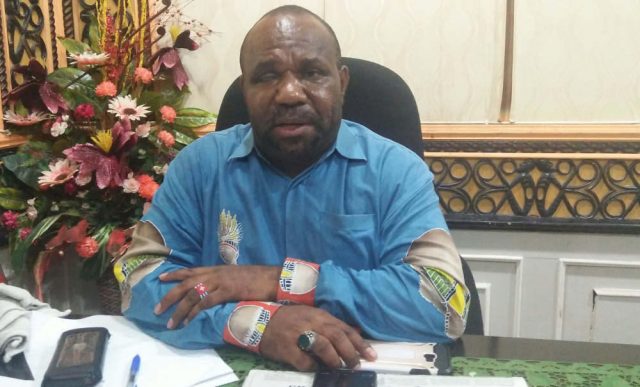 Jayapura, Jubi – Emus Gwijangge, Papua parliament member from the Democratic fraction, appeals to any individuals or groups to not exploit the current situation in Papua for their personal or group interests.

He said this to pointing some recent group meetings with President Joko Widodo in Jakarta. The first group, he mentioned, met the president and then proposed some requests, while another group claimed Papuan youth representatives met some state officials. And the most recently some officials of the Indonesian community group in Papua met President Widodo and asked the president to divide the region of Papua into seven indigenous territories in both Papua and Papua Barat provinces.

“Everyone has a right to meet the president. But please do not act on behalf of indigenous Papuans while requesting something to the president,” Gwijangge told Jubi on Wednesday (16/10/2019).

According to him, indigenous Papuans never ask for a title, new regional split or anything else. What they want is the central government sit together with them in a forum facilitated by the third parties addressing some issues that occurred in Papua.

“What indigenous peoples want is a historical correction as well as the settlement of many cases of human rights violations in Papua. Therefore, the Melanesian race no needs to continue our contention against the central government. We shouldn’t go to Jakarta for asking so many random requests,” he said.

Moreover, he hopes President Widodo and other state officials should carefully accept the proposed meeting by any groups from Papua who claimed to represent indigenous peoples.

He said if the president and state officials want to meet indigenous Papuans, they must invite the indigenous representatives. Also, the provincial government officials, local parliament and Papua’s People Assembly members and religious leaders are there to consider.

“The sort of this representation would guarantee that the aspirations delivered to the president are coming from the indigenous Papuans. It would contribute to the future of our grandchildren for they would not be engaged in the same problems and continuously become victims,” he said.

Meanwhile, Ahmad Taufan Damanik, the Chairman of the National Human Rights Commission, said Komnas HAM has repeatedly advised President Jokowi to come to Papua for a dialogue. The president is suggested meeting people and any relevant stakeholders to solve problems in Papua.

However, he said, the president has contrary invited other groups, who claimed themselves as Papuan leaders, to Jakarta.

“Inviting a group of people from Papua to Jakarta is not what we meant, but the president himself needs to come to Papua,” said Ahmad Taufan. (*)