The representatives of the people, Semuel Farisa and Reymundus Fenetruma, told Jubi that the villagers did not know anything about the logging activity, which had been done by two contractors of PT Prabu Alaska.

“We’re surprised to find out that there has been logging activities in our customary territory, the territory of Tanggarofa, Wanusanda, and Fenetruma clans in Fruata and Rauna kampung without anyone telling us,” said Farisa.

Fenetruma said the logging had to be stopped because up until now the three clans had never been informed or been asked for their consent about the logging done in 2021.

He hoped the provincial administration, especially the Forestry Agency, could solve the problem. “If they fail to facilitate any solutions, we would stop the activities by blocking the operation of PT Prabu Alaska,” he said.

PT Prabu Alaska is a subsidiary of PT Alamindo Lestari Sejahtera. On its website, Alamindo carries a tagline “Bangun Bumi Papua” or “Develop Papua Land”. It says the name of the company is PT Alamindo Lestari Sejahtera Tbk, indicating that it is a “tbk” company, or a legal term in Indonesia for a publicly listed company. However, on March 16, there was no company named Alamindo in Indonesia Stock Exchange’s directory.

On its website, Alamindo’s president director is Adi Gunawan. Alamindo said its subsidiary is PT Prabu Alaska and it has a license called IUPHHK-HA, or a concessions from the government to exploit resources in the woods, in Fakfak and Kaimana regencies in West Papua province and in Boven Digoel in Papua province. The license spanned on 329,215 hectares of land, the website said. 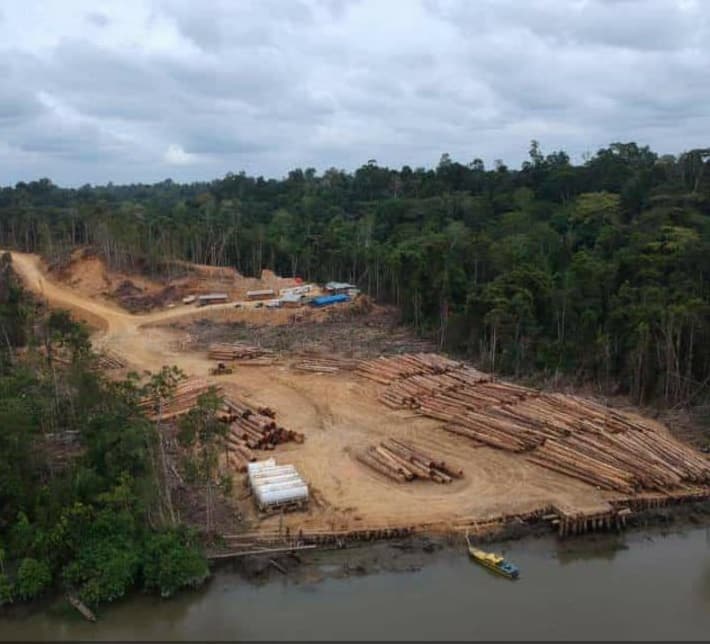 A picture of forest clearing in PT Prabu Alaska’s concession area, which spans in Fakfak, Kaimana regencies in West Papua province and in Boven Digoel in Papua province. Courtesy of Alamindo.co.

A local media, papuakini.co, reported on Feb. 21, 2021, that Alamindo’s entourage came to Manokwari that day and met with West Papua Governor Dominggus Mandacan. Alamindo promised to invest Rp 70 trillion in the province.

Adi Gunawan told papuakini.co that they planned to invest in four regencies: Fakfak, Kaimana, Sorong Selatan, and Bintuni Bay, on 400,000 hectares of land.

Gunawan claimed they had presented the plan to Vice President Ma’ruf Amin, who welcomed the plan.

Another local media outlet, gardapapua.com, reported that among the entourage was Kim Johanes Mulia, part of Alamindo. Kim is known as a controversial businessman. Both gardapapua.com and papuakini.co published pictures of Kim sitting with West Papua head of the forestry agency. Papuakini.co also published his picture with Governor Mandacan and Kim’s picture while being welcomed in a customary ritual at the airport on Feb. 21.

In October 2018 Kim became a wanted person by the Central Jakarta Prosecutor’s Office. He was at large until he was arrested in September 2019, according to a report by Antara news agency. At that time he was found guilty of embezzlement, incurring Rp 31 billion loss to businessman Adang Bunyamin, and sentenced to two years in prison. If he served his sentence in full, he should have been released from prison in September 2021.

The prosecutor’s office made a Twitter thread on Sept. 5, 2019, to announce Kim’s arrest.

Earlier in August 2018, only months before he was in the wanted list, Kim made an agreement with state-owned airlines, PT Merpati, which was at that time ailing. Kim, through Intra Asia Corpora, made an agreement to bring Rp 6.4 trillion to Merpati in two years, and plan to make the company start operations again by 2020.

Google search found that from November to December 2018, Kim’s name was mentioned in several prominent media outlets concerning his company’s promise to inject money in ailing Merpati. Apparently, at that time, the fact that he was on the wanted list since October 2018 was not made public by the prosecutor’s office.

The news also quoted Finance Minister Sri Mulyani who asked then State-owned Enterprise Minister Rini Soemarno to find an investor for Merpati who “have a good track record”.

On Feb. 22, 2021, CNN Indonesia reported a hearing between former Merpati employees and Commission VI of the House of Representatives, where the former employees lamented the fact that the promised investment was likely cancelled because “the investor was in jail”.

There was no public record of Kim’s release from the prison in Jakarta.

In 2010 Kim made the news because he bought 30 Sukhoi Superjet for US$900 million. He was at that time an owner of Kartika Airlines. However, according to a report by Tirto.id, Kartika ceased operations in 2011. Kartika’s website confirmed that the airlines had stopped operation. “But the website kartika-airlines.com continues to bring information for tourists and travellers going to Indonesia,” the web administrator wrote.