After inauguration of new leadership, KNPB Merauke was arrested 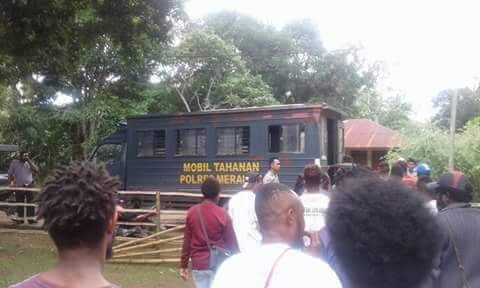 “The arrest took place at 11 AM in the secretariat. Masses were lifted into a police truck, four patrol cars, including 77 people and even a 3-year-old toddler,” according to Mecky Yeimo, Central Board of KNPB who was also arrested, by phone to Jubi.

Mecky said five of his members were being interrogated by police in the Police’s Detective Room. They are Charles Sraun as elected chairman, Emanuel Metemko, Novaris Wopai, Mother Pankresia Yem and Marius Yandum.

Novaris Wopai, general secretary of KNPB Merauke region in his statement to Jubi after interrogation said police asked questions about their activities that morning.

“They asked my full name, position, the activity, the contents and purpose of the activity. I said that it was done to inaugurate the new leadership. They also asked KNPB mission and its vision, and I say generally we are fighting for the right of self-determination through a referendum mechanism, ” Novaris said by phone.

According to Mecky Yeimo’s information, the police raid the secretariat at around 11 am because KNPB considered unregistered organization. “So (the arrest) is not because of activity’s permit, they came after we just ended the activities with praying,” said Mecky.

He also said that security forces had taken excessive action when they came to the secretariat and bring the masses to the resort Police.

“They forced the participants to take off their BK (Morning Star) shirts and attributes, Noken with BK emblem also confiscated,” Mecky said.

The first people to be interrogated, he continued, were the men who wore BK shirts, while others were examined from head to toe.

AKBP Bahara Marpaung, Merauke Police Chief justified the arrest of 77 people. But he refused to call it an arrest.

“It was not an arrest, but we ‘gather’ them to know their intentions and objectives of the activities which they claimed on behalf of KNPB in Merauke. So we try to investigate it. Then we will also link with the evidence that we get,” said Kapolres Bahara Marpaung to Jubi by phone.

According to him the number of people “gathered” and “directed” is about 72 to 73 people, and it is said as a usual procedure. “This is a normal procedure, but later based on our interrogation there will be evaluation link to the evidence then we will conclude,” he said.

With regard to the evidence and violations of KNPB members are doing, the Chief of Police has not been able to give any information because they are still waiting for the outcome of investigation.

According to Mecky Yeimo all the 77 persons have been released at 6 PM local time. “But our personal belongings confiscated by the Police apparatus are not yet returned,” Mecky said. (*)