I Know Nothing About The Hostages : Jeffry Pagawak 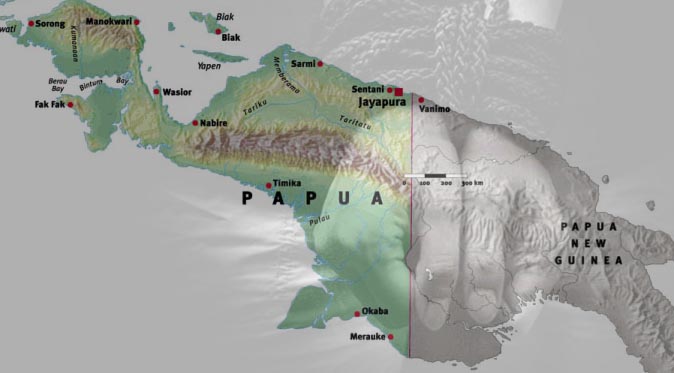 Meanwhile, Pagawak rejected the allegations, on Tuesday (15/09/2015), saying he has moved to Port Moresby for two years and a half to consolidate the struggle of West Papua diplomacy in Pacific Islands Forum, which just ended last week.
“I do not know about the hostages. I am not a member of the West Papua Liberation Movement (TPN-OPM). I have worked in Port Moresby since the first time I’ve moved in Papua New Guinea to promote the human right violations in West Papua and do lobbying in PIF. Now we struggle through lobby and advocacy. We are now fighting in peace,” Pagawak said by phone.

He suspected the hostage-taking news which stated his name as responsible person behind the hostage of Sudirman (28 years old) and Badar (30 years old) on Wednesday last week was connecting with the West Papuans achievement in PIF last week. He admitted his participation in the civil society meeting with the PIF leaders and encourages the deployment of investigation team of Pacific countries to West Papua.
“The goal is to ruin the credibility of our struggle achieved in PIF. Those media were also telling wrong information by saying KNPB was involved in Bloody Abepura incident in 2006, for example. In fact KNPB was established in 2008,” said Pagawak.

The Papua Police Chief Inspector General Paulus Waterpauw told to reporters in Jayapura on Monday (14/09/2015) that the information on two hostages is still not clear. There’s information about two citizens were taken hostages by the rebel group under Jeffy Pagawak, but the Papua Police is not able to confirm whether they were taken hostages by certain group because there is no data and finding fact,” Waterpauw said.

Jeffry Pagawak, with other Papuan activists, has been named in the wanted list after the Bloody Abepura Tragedy that killed four police officers. Along with Hans Gebze, Arnold Omba and Henny Lani, he was accused as person in charge over the peace protest ended with chaos. Since being listed, Jeffrey Pagawak left Papua to live in Papua New Guinea. (Victor Mambor/rom)

10 Draft Regulations to be Discussed by Papua Legislative Council