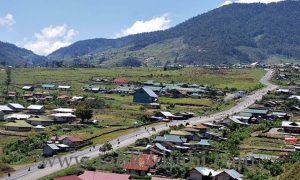 An illustration of the capital of Puncak Jaya Regency captured a few years ago. – Jubi Courtesy

Besides marking the case winning for the one hundred and twenty-five village chiefs, according to the provincial parliament member Yunus Wonda, the court decision also warns regional heads to not make village chiefs redundant without distinct reason and well procedure.

“This warns other regional heads in Papua to not dismiss village chiefs as they pleased without a strong legal basis,” Wonda told Jubi on Tuesday (19/11/2019).

This case started when one hundred and twenty-five village chiefs in Puncak Jaya Regency dismissed by the regent. They then filed a lawsuit to Jayapura Administrative Court (PTUN) against the regent. As a result, the Panel of Judges of PTUN Jayapura granted their appeal and ordered Puncak Jaya Regent to revoke the decree.

Moreover, Wonda appreciates these village chiefs for carrying a legal action following their unilateral dismissal. Wonda said that it indicates that these village chiefs are prudent in addressing the problem they faced though they were aware that their service would end in 2021.

“It must be a good example because violent would never solve any problems. I hope Puncak Jaya Regent can apply the verdict issued by the Supreme Court to reactivate the one hundred and twenty-five village chiefs who had dismissed,” he said.

In the meantime, the village chiefs’ attorney Herman Bongga Salu said the verdict by the Supreme Court is ultimate and obligatory.

“With the verdict of the Supreme Court, it means the village chiefs appointed by the Regent Decree was a legal defect. Therefore, the status of dismissed village chiefs must restore,” he said last week. (*)