Hundreds of people were detained in Papua ahead to 1 December 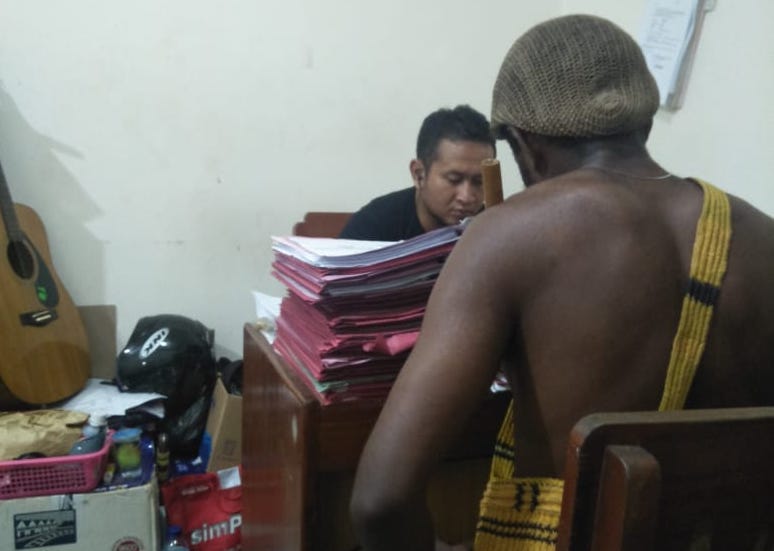 One of four students who arrested by police at Gereja Gembala Baik, Abepura on 1 December. – Courtesy of LBH Papua

Jayapura, Jubi – Around 112 people were arrested by police in several towns of Papua and Papua Barat provinces within a week ahead to 1 December 2019 under the treason article concerning the Morning Star flag-raising.

Five days before 1 December which commemorated as the Papuan political manifesto by Papuans, a young Papuan activist Pilipus Robaha arrested by police in his house on 26 November 2019. The police questioned him in association with a letter posting on social media appealing people to attend the commemoration worship of 1 December at Trikora Square. Lack of evidence to accuse his involvement connected to the report, the police released him the next day.

A day after his arrest, the police detained eight people in Manokwari at around 3 in the afternoon of local time. The Regional Police Chief of Papua Barat Province, Brigadier General Herry Rudolf Nahak, said during the police seized twenty-nine big-sized Morning Star flags, some posters and pamphlets and two cars.

“During the interrogation, these eight people admitted that they participated in the event after reading the pamphlet about a rally at Borasi Square, Manokwari on Wednesday morning,” said the police chief.

Until Thursday (5/12/2019), they are still under the custody of Manokwari Police. So far, the police declared none of these eight persons named suspects. However, the police have charged seven detainees under the treason article, according to Yan Warinussy, the Executive Director of Legal Aid Research, Study and Development Study (LP3BH) Manokwari. Meanwhile, another one only named as a witness.

Another arrest occurred in Sentani City of Jayapura Regency. The police detained thirty-four people on Saturday evening (30/11/2019) while marching towards Trikora Square, Abepura to participate in a flag-raising ceremony. The police also accused them as the members of the West Papuan National Liberation Army from Demta sub-district and Sarmi Regency after finding evidence of their membership cards.

Jayapura Police Chief Adjunct Commissionaire Victor Makbon said “We already released fourteen of them, but twenty people have named suspects. We charged six of them under the Emergency Law on the possession of sharp weapons and the Treason Article 106 and Article 2 verse (1) of the Criminal Code.”

Regarding this case, Yohanis Mambrasaar, a lawyer from Papua Human Rights Advocates Association (PAHAM), confirmed that the report on twenty people charged for treason. Currently, he said PAHAM is preparing the power of attorney to provide legal assistance for detainees.

Separately, the police arrested four students at Gembala Baik Church in Abepura on Sunday Morning. Marvin Yobe, Desepianus Dumupa, Paul Halapok and Devion Tekege wore the Papuan highland traditional clothes and pained their bodies with the Morning Star pattern. They also brought the Morning Star flags to the Church during the worship time.

The arrested student Desepianus Dumupa said the purpose of their act was to ask God for freedom. “Our purpose carrying the flag in the worship was to ask God’s help, ask Him to liberate our nation,” said Dumupa.

By Monday morning, the police called Father James Kosay who led the worship at Gembala Baik Church on 1 December to question related to the arrest of four students. “At the time of arrest, there were twenty police officers, both without and with uniform, entered the church during the worship that made people panic,” said Father James.

A day before the incident in Gembala Baik Church, the police also called Markus Haluk, the Executive Director of the United Liberation Movement for West Papua (ULMWP) in connection with The Call for Communal Worship on 1 December 2019. The police interrogated Haluk with twenty-nine questions for six hours.

Another detain also occurred in Fakfak. The local police of Fakfak arrested 54 people in Warpa, Pikpik and Mabuni-Buni villages of Kayauni sub-district at around 3 in the afternoon on Sunday (1/12/2019). The police accused them intending to raise the Morning Star flag at the residence of Fakfak Regent. Also, the police claimed the fifty-four detainees as the members of TPNPB after finding their membership cards during the arrest.

Fakfak Police Chief Ary Nyoto Setiawan said that the Morning Star flag was already raised in Warpa village by twenty-three people with sharp weapons. When the arrest took place, according to the chief, the police also found the amount of IDR 88 million on the scene.

“The money was about to send to their highest rank leader in Jayapura,” said the chief.

Based on their investigation, the police has officially named twenty-three people as suspects.

The Recherche and Crime Investigation Chief of Fakfak Police, Misbahul Munir, said, “ These twenty-three people wanted to come to Fakfak to wave the flag at the official residence of Fakfak Regent.“

A photo of the arrest in Pikpik village of Fakfak raised criticism among Papuan people following its circulation on social media. In the picture, almost naked, some people tied up together and remained sitting by the road.

“The right word for the picture is slavery. Only those who experienced colonialism can do this. They experienced the same oppression before their independence. So, they want to practice the same thing against the oppressed people,“ said Filep Karma to comment on the photo that goes viral on social media.

However, Fakfak Police has not yet confirmed about the picture. So far, the Recherche and Crime Investigation Chief of Fakfak Police has not answered the phone and WhatsApp message to clarify the photograph allegedly describes the arrest in Pikpik village. However, several Fakfak residents confirmed that the circulated photo about the detain in Pikpik village on 1 December 2019 is valid.

“They arrested on 1 (December). A man with white hair body on chess was my classmate, Yance Hegemur,” said a Fakfak resident by phone to confirm the photograph.

Meanwhile, the Chairman of Domberai Customary Council Finsen Mayor also believes the same way. “Yes, it was the picture of the incident on 1 December in Fakfak. They transported to Fakfak Police Headquarters in the evening,” said Mayor.

From Tuesday (26/11/2019) to Wednesday (4/12/2019) afternoon, there are 101 people arrested and interrogated by police in connection to 1 December. So far, 82 people are still detained in Fakfak, Manokwari and Sentani, while the rest already released by police. At least 27 people have named suspects under the treason article, in which twenty people in Sentani and other seven in Manowakri.

In the sense of police acts to anticipate 1 December by arresting Papuans, according to Yan Warinussy, it would only worsen the image of the Indonesian Government among Papuans as Papua has a different historical background to other regions in Indonesia. This recognition is implicitly acknowledged the verse e of the Law 21/2001 about the Special Autonomy for Papua.

“1 December should be used as a milestone to create constructive efforts to straighten the history of Papua by the people of Papua and the state for the sake of peace,” said Warinussy.

He further asserted that every social and political movement of Papuan people, which contain different aspirations, should be responded with the kind response and accommodated through peaceful dialogue. (*)