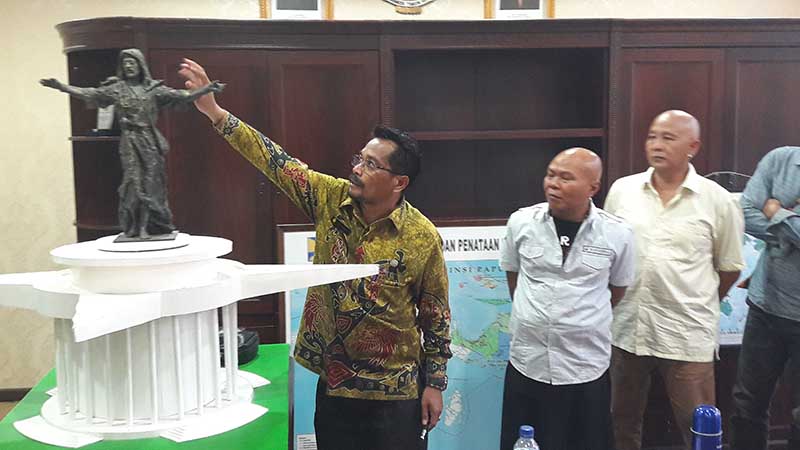 Sentani, Jubi – Papua Provincial Government plan to build the Statue of Jesus Christ in Bukit Kayu Batu Jayapura City begins by conducting a survey on the location to be used to build the statue.

Djuli Mambaya, Head of Public Works Office of Papua Province after conducting a survey with his team said that the statue of Jesus Christ to be built on the hills close to Kampung Kayu Batu on the eastern part of Jayapura City.

It is said, the statue to be built is the highest in the world, with the height reaches 67 meters made by bronze and copper material, some special parts will use pure gold.

“The statue will stand as high as 67 meters in the area of six hectares we have agreed on, and under it will also be built like a museum which recorded all the history of church denomination in Papua. When it finished, would be an international spiritual destinations,” said Djuli Mambaya in Sentani, Saturday (April 22nd).

He explained, the construction process will begin this year with cost range from 300-500 billion rupiah.

“Development progress will begin this year, the customary right issue is partly discussed with customary owners, while the sculptors we bring to build this statue are those who are truly experts in their fields at national and international scale,” he explained.

The construction of the statue will involve five artistic and modeling teams. It is targeted that the sculpture will be finished within a year and a half.

Noor Ibrahim is one of the sculptors involved coming from Yogyakarta. He said it is important for Papuan people particularly and tourists in general to have one icon that will attracts national and international community.(*)

Papua minimum wage will be revised to Rp 3 million