Hemodialysis Room Must Be Completed This Year 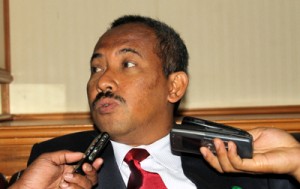 Jayapura, Jubi – Management of the Jayapura Public Hospital plans to finish building a room for hemodialysis and heart patients at the end of 2016.

Hospital director Josef Rinta said on Monday (26/6/2016) in Jayapura that the ward was set up to reduce waiting time and fulfil the public’s needs. “Currently the room could load six machines, while after renovation it could load 12 machines. So (people) no need to wait for so long,” he said.

Meanwhile, to improve manpower at the hospital, the management would send a team to enrol for endoscopy training in other provinces.

“This is part of our program with the fully support from the governor. Through this assistance, the hospital could become a national referral and representative hospital,” he said.

He added the human resources capacity building was done to no longer send the staffs to be trained at the outside of Papua. “With the support from Dr. Sarjito Public Hospital and the Faculty of Medicine of Gadjah Mada University, we gradually can handle the human resource issues,” he said.

Earlier, Papua Provincial Secretary Hery Dosinaen emphasized that in order to realize Jayapura Public Hospital as the national referral hospital in next year, the Central Government has allocated Rp 350 billion to build the six-floor integrated clinic. “The plan to build the six-floor integrated clinic has been approved by the Coordinating Minister of Political, Legal and Security Affairs. The fund would transfer directly to the hospital authority,” he said.

Additionally, said Dosinaen, the Papua Government would allocate the extra funds for the renovation of Jayapura Public Hospital in the Regional Budget revision.
“However, we realize that our weakness in on budget revision. We would prioritize it and it also would be added in the original budget 2017,” make prioritization and it would be added in the original budget 2017 as well,” he said. (Abeth You)

FOUR PUBLIC HOSPITALS TO BE UPGRADED

Again, dozens of teachers demand their rights to education office

Food Shortage in Tree Sub-districts Due to Frost