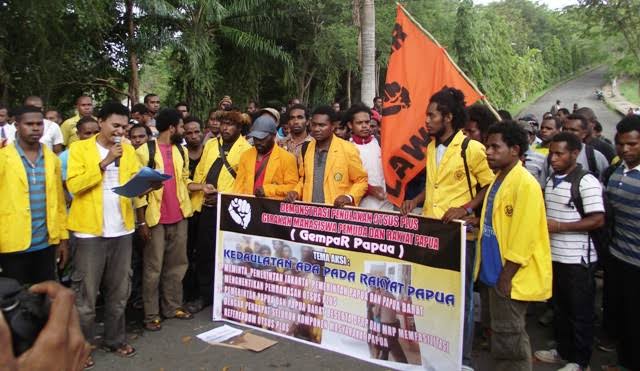 GempaR-Papua in a protest conducted in front of the University of Cenderawasih’s gate, Perumnas 3 Waena some times ago. – Jubi / Agus Pabika

Jayapura, Jubi – GempaR-Papua (Papuan Student, Youth and People Movement) of Jayapura Municipality urges the Government of Indonesia to discontinue all projects that often related to economic development, but in reality threatening the life of the indigenous community.

The Chairman of GempaR-Papua Samuel Womsiwor said it involves many interests ranging from long-term investments to the exploitation of natural resources in which triggering many human rights violations for both Kamoro and Amungme peoples.

“We decline the national food security program –the Merauke Integrated Food and Energy Estate—in Merauke. Also, we reject the militarization of all efforts to spread the investment throughout Papua that supported by President Joko Widodo. Therefore, we urge the Government of Indonesia to open the access to Hak Guna Usaha (HGU) for the community,” Wamsiwor stated in a release received by Jubi on Tuesday (13/8/2019).

Further, GempaR-Papua also asks the Indonesian Government to immediately withdraw its troops from Nduga due to human rights violations occurred against indigenous peoples. Importantly, they also urge the government to open access to local, national, international journalists and humanitarian workers to work in Nduga and throughout Papua. (*)