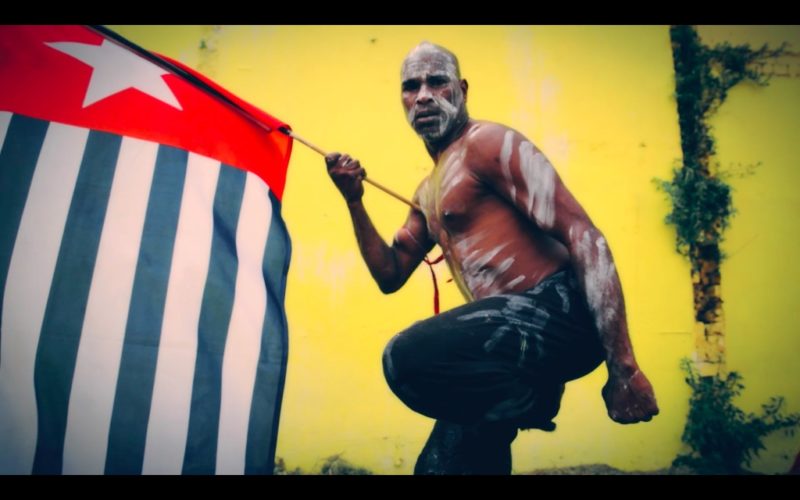 Melbourne, Jubi – The music video track, Full Freedom, draws parallels between the rise of racial violence in the USA, and violence against West Papuans in Papua.

ARIA nominated producer Airileke & Dizz1 have joined forces again to release a new remix of the song “Full Freedom” through Rize of the Morning Star. Having put out the original track and a video for the song in 2012, the updated release is a Krump mix that includes a sample from Tight Eyez, the creator of Krump himself saying:

The audio is taken from an interview where he elaborates on Krump as a movement and art form, and his assertion on the importance of raising awareness about the ongoing human rights abuses in West Papua.

The song also contains excerpts from a speech given at the United Nations 20 years ago by Benny Wenda, the exiled Independence leader and spokesperson for The United Liberation Movement for West Papua. Although heavy with campaign messaging from the Free West Papua movement, the new “Skittles & Tea” mix and film clip is named in reference to Trayvon Martin, an unarmed, African American 17 year old who was shot and killed on his way home from the store.

Although unjustified, his shooting was ruled “legal” by a Florida jury.  This remix and video are Rize of the Morning Star’s response to a situation in both the USA and West Papua where police brutality happens with impunity.  In these times we see some Freedom but we still seek Full Freedom.

“Hip hop has always had that vibe of pushing back against oppression. What I love about Krump is the fact that it is resistance through dance and music – it’s not about a Rapper. It’s more collective than that, its more tribal than that, the raw aggression in Krump is something that Pacific Islanders can relate to”, says Airileke

About the music video

Produced in a collaboration of Rize of the Morning Star teams in Australia and the USA, the video was created to dramatize the ongoing human rights struggle in West Papua, and to start a conversation about solidarity across borders for all people experiencing marginalization in their communities.

“This is the first time a solidarity video from the U.S. has been made, so we really wanted to create a piece that showed iconic American imagery and artists, then present it alongside their Melanesian counterparts. We wanted to speak to the fact that although we are far apart in distance, our worlds are connected through our common struggles,” said Jewell Faamaligi, Representative for the RIZE team in the U.S..

The point of naming it after Trayvon is to speak to the reality that at the end of the day we all want the same thing; to be able to return home safely from doing something as innocuous as going to the store to buy Skittles and tea. When an injustice happens anywhere in the world we all feel it deeply, because it is an unwanted reminder of how fragile the lives of people of color are.”

Through this film clip we wanted to show to the Papuan people that their cries have been heard on the other side of the Pacific Ocean. This is a message from the streets, for the streets. This track bridges from one end of the Pacific to the other.… its a bridge created for the message of West Papua from the Streets of Moresby to the Streets of L.A.

The title of the track also references what is going on in the United States right now. “At the moment we see the same things going on in Australia, with political leaders giving space for the rise of overt racism,” said Arilike.

“West Papua has the largest Gold and Copper mine in the world, most likely the device you are reading this on comes from resources extracted from West Papua. The Freeport mine was part of the deal the USA and Australia made with Indonesia to allow West Papua to be handed over to Indonesia.

We have since seen the indigenous population decline from over 95% to less than 47% in just 50 years,” he also said.(*)

Source: Rize of the Morning Star

Rize of the Morning Star