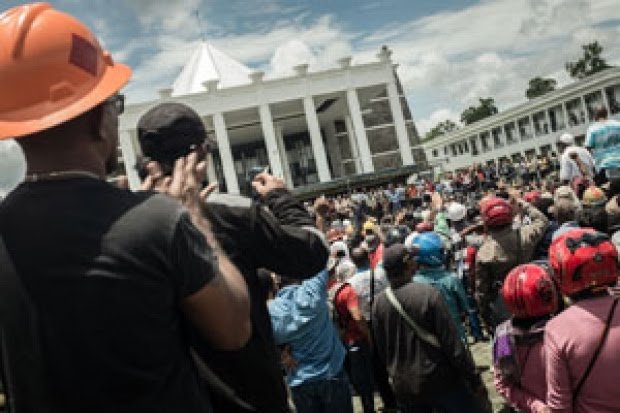 “PT. Freeport is seeking for a way to smooth out their ‘furlough’ program because of the company has lost their profit even though it has not proven,” said Talakua when giving his statement at the Office of Papua Human Rights Advocates Association (PAHAM) on Monday (8/10/2018).

The decree No.560 / 1271 issued by the Provincial Manpower Office concerning the inspection of the Service Supervisory Team stated that the 18 months strike conducted by 8,300 Freeport workers were legal according to the Law No. 13 of 2003 about the employment.

Therefore, the termination of employment without the stipulation covered in article 151 is void,  whereas the mechanism of furlough determined by the Company not acknowledged by Law No, 13 of 2003.

Moreover, Talakua accused PT. Freeport’s statement about the loss was a defence to ignore the rights of thousands of workers who do strike to get justice for their fundamental rights, such as the right to live and to work as well as the right of association.

“We have attempted various efforts referring to the mechanism and the laws of the Republic of Indonesia by meeting with the government agencies and the House of Representatives for voicing the injustice committed by PT. Freeport Indonesia,” he said.

Meanwhile, to Antara, the Chairman of Department of Chemical, Energy and Mining Workers (SP-KEP) SPSI Aser Gobay said in the decree the Provincial Manpower Office also confirmed that the dispute of industrial relations between PT. Freeport Indonesia and the strike workers have no legal requirement.

On that basis, the Provincial Manpower Office believes that the Company is obliged to fulfil all the rights of the employee and provide them benefits and allowances from May 2017 to date.

“This is a step forward for the workers and their affiliation who do strikes in Mimika District. We have received a decree issued by the supervisory team of Papua Provincial Manpower Office in which concluded that a strike conducted since May 2017 legally acknowledged by the Indonesian Law,” said Gobay to Antara in Timika on Thursday (4/10/2018).

In line with that, the Papuan Student and Workers Coalition urge PT. Freeport Indonesia to Immediately comply with the Law No. 13 of 2003 and consider the fundamental rights of 8,300 workers that have been neglected by the company.

They also demanded the management of PT. Freeport to immediately provide the normative rights of employers and be responsible for 33 workers who died due to the termination of employment as a result of the strike.

Furthermore, the association asked the Ministry of Manpower and Transmigration to take a prompt action to solve the protracted dispute between the workers and PT. Freeport Indonesia as well as urged the Papuan Parliament and the House of Representative to be assertive against PT. Freeport regarding a decree No. 560/1271 issued by the Provincial Manpower Office about addressing the termination of employment. (*)

Assimilation Program Gives Inmates in Merauke Time out of Jail

If Investigation Team Drags Its Feet, Councillors To Form a KPP HAM