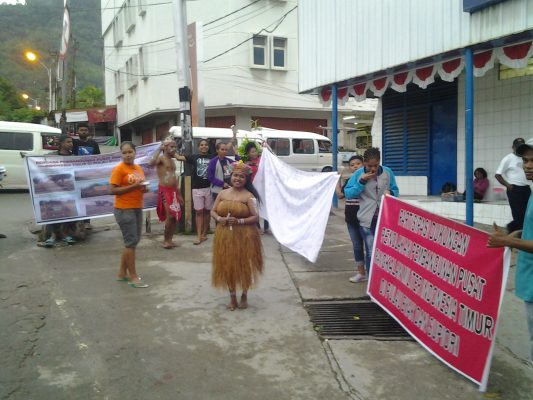 Jayapura, Jubi – To mark World Indigenous People’s Day, Forum Peduli Kawasa Byak (Byak Community Forum) in Tanah Tabi launched a petition to reject plans to set up a military base for the eastern Indonesian region in Biak and Supiori islands.

“We are the students and Biak people in Papua, especially who live in Tanah Tabi (Jayapura), strongly reject the military base for the eastern region that is planning to be built in Biak and Supiori islands,” Silas Usyur at Jubi Office.
So we collected people’s signatures by displaying a white cloth of nine meters at Lingkaran Abepura to support our petition,” he said
He said the presence of military base in Biak and Supiori islands would not benefit the Biak community.
“No contribution on education, health, economy, social and culture as well as the infrastructure. But it would only open the old memories or trauma over the Bloody Biak case and it would trigger the incidents of human rights violations against the local people in Saireri Customary Area,” he said.
Secretary of FPKB, Agus Rumaropen admitted on 29 December 2015, the President of the Republic of Indoensia, Joko Widodo came to Biak and gave his promise to improve the education, health, economy and infrastructures as well as the tourism sector in Biak Island. “But it turns out now. He gives something that we never want to. It’s extremely wrong,” said Rumaropen.
He said the Indonesian legislator Fahri Hamzah who agreed on this military base, but it’s not people’s choice. “We strongly refuse it. And now we are doing campaign to reject it. And within two weeks we will conduct a massive demonstration in Jayapura,” he said. (*/rom)
indigenous peoples Military base

INDONESIA URGED TO COMMUNICATE WITH PNG AFTER SHOOTING INCIDENT

NO PROCUREMENT OF OFFICE VEHICLES IN 2014