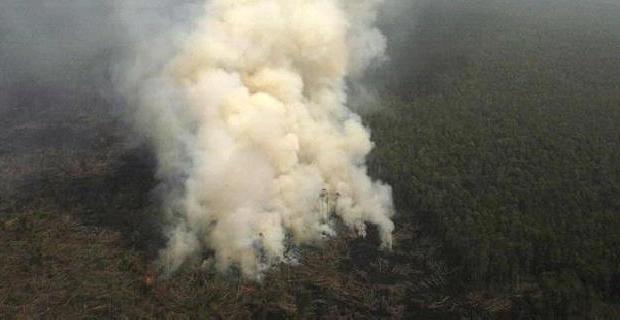 Jayapura, Jubi – The forest fires that have occurred in Papua and other Indonesian regions are not a regional-level disaster because it happened due to the human negligence, the Executive Director of Yayasan Pusaka, Y.L. Franky, said.

“What’s called as regional disaster is a situation caused by nature, but in this case it was deliberately burned,” he said.

“There is an intentional factor and human’s negligence. Thus, it is not appropriate to call it as regional disaster,” he said on Wednesday (21/10/2015).

Based on the satellite data by the National Institute of Aeronautics and Space (Lapan) on 5 September 2015, there are 200 fire spots in Merauke Regency and surrounding areas, particularly in Naukenjerai, Semangga, Kurik, Ilwayab, Tamboji sub-districts in Merauke Regency.
“Gazing at the fire spots, those fires might be involved both old and new companies as the culprits. The companies’ negligence; that is our question. Today the fire spots are founded either in the oil palm plantations or the forest concessions. According to the regulation opening the forest by burning is prohibited,” he said. But the worst haze disaster was happened in the second week of October 2015, which led to flight delays in Timika and Ambon.

Franky asked the corporates and the State to be responsible.
“People are aggrieved as well as the environment, while the corporates got profit. The cost of land opening is lower but damaging and endangering the human’s life. A disaster leads to a pleasure and benefit for the corporates only,” he said.

According to him, the burning as an alternative to sterilize the soil in oil palm plantation and forest concession is a modus that had happened long time ago in other regions, such as Sumatera and Kalimantan, although it has been prohibited. Therefore, it’s a duty of the Central Government to resolve the fires that were occurred recently.
“The Government should take appropriate measures to prevent the fires and ask the corporates to be responsible,” he added.

He asks the Government to not declare the case of fires as regional disaster but penalize the relevant corporates according to the Law.
“This current case of fires is a crime against humanity. In other region, it has taken the casualties. And it has happened many times, again and again,” he said.

Meanwhile, the member of Commission I of the Papua Representative Council, Laurenzus Kadepa, said the land fire is not appropriated to be called as disaster; there might be an intentional factor.
“In my opinion, the government should call it as national disaster, or it was happened because of dry season. It’s not appropriate. It demonstrates the government’s inability to resolve the problem. The government should find who’s the architect and what’s his motive. It could be done on purpose because the land fires are almost occurred in some Papuan areas,” Kadepa told Jubi by phone on Wednesday afternoon (21/10/21015).

Further he said, these incidents might have connection with the political interest, given the regional heads election would be held simultaneously in eleven regencies in Papua on 9 December 2015. “There’s a possibility about the political interest involved the investors and candidates related to the oil palm project. My advice is leave that interest, safe the Papuan forest for our children,” he said.

Antara News Agency earlier reported the Cenderawasih XVII Military Regional Commander Major General Hinsa Siburian said until now there’s no report said that the major cause of forest fire in the southern Papua was because of land clearing for plantation. “The cause of fire is more related to the natural and human factors that worsen the condition because people prefer to open the farming land by burning,” said Siburian in Merauke on Tuesday (20/10/2015). (Angela/Arjuna/rom)