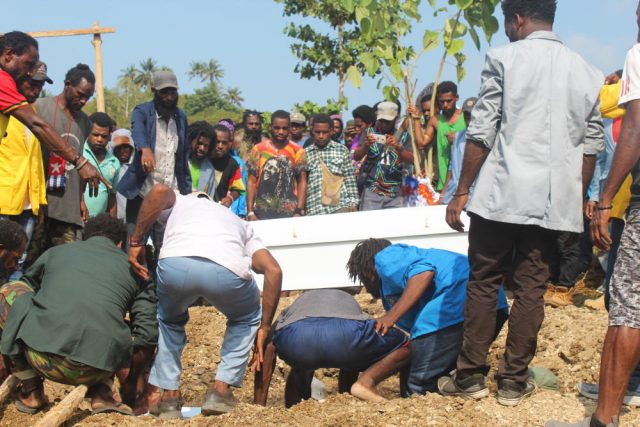 Jayapura, Jubi – The exodus wave of Papuan students from all over cities of Indonesia recently has caused six students dead and six others detained by the Papua Police.

The four dead victims Ason Mujijau, Eramanus Wesareak, Jery Murib and Otier Wenda were allegedly shot by police during a clash at Expo Waena on 23 September 2019 when the police forced students to dissolve from the rally. Among those victims, Wesareak was the youngest. He was registered as a high school student, while others were university students.

Meanwhile, another dead victim was a student Astinus Sama who died in a traffic accident. According to his family, he died after being hit by an unknown person on Sunday, 29 September 2019. However, the police said no one involved in the accident. It was a single-vehicle crash.

In this sense, the Secretary of Exodus Students Roby Hiktaop confirmed four students killed by bullets on 23 September and one died due to a hit-and-run accident on 29 September 2019.

“The accident occurred on Sunday morning when Astinus Sama drove his motorbike ‘SPM Honda Beat’ with plat number PA 3527 RQ from Waena to Sentani at high speed. As a result, he couldn’t control his stir while on the road in front of the floating restaurant in Sentani Timur. Losing the balance, he fell and was thrown from the motorbike alongside the road and immediately taken to Dian Harapan Hospital,” said Chief Heri as cited in the police news website Tribratanews.papua.polri.go.id.

Furthermore, Roby Hiktaop said after mass dissolution by police on 23 September 2019; the exodus students are now living with their families or student dormitories.

“Based on the recent meeting, the students plan to open a new post to protect the exodus students,” he said.

According to him, the exodus students are still intimidated by the authorities. Therefore, they cannot meet each other for organizing a meeting. “Our friends started to feel unsafe to live in Jayapura because the police keep their eyes on them. They have also been stalking by unknown people. So, many of them decided to go home to their respective regencies, but the police hold them before they arrived at the airport to be recorded and photographed.

Earlier, Emmanuel Gobai, the Director of Papua Legal Aid Institute, explained that six students are still in the police’s detention at the Papua Mobile Brigade Headquarters in Kotaraja, Jayapura. They are Assa Asso, Yogi Wenda, Jembrif Kogoya, Abraham Dote, Elimus Bayage and Yandu Kogoya. These students were arrested following the clash on 23 September 2019 at Expo Waena and charged for committing treason and other criminal acts according to the Indonesia Criminal Code.

A parliament member Edmus Gwijangge from the Commission of Governmental, Politics, Law and Human Rights of the Papuan House of Representatives (DPRP) asks the police to uncover and confirm the cause of the death of three students in a clash involving students and the security forces at Expo Waena, Heram Sub-district, Jayapura City on 23 September 2019.

He said the police must be transparent with this case. If they find that the cause of students’ death is bullets, they must reveal who did it;

given that the security forces in charge at that time were joint military, mobile brigade and police officers.

“Whether the students died because of mistreatment or other reasons, the police also need to reveal. Regarding a soldier who died during the incident, the police also must find out whether the perpetrator is a student or someone else,” said Gwijangge on Tuesday (01/10/2019).

According to him, after the Expo-Waena incident, the police is currently more focusing on arresting and investigating students who involved in the conflict as suspects.

“There should be transparency for the victims’ families. If the students died of being shot, who shot them? If this case is yet not revealed, it will give a wrong impression to the police.

Therefore, he hopes the new Papua Police Chief Paulus Waterpauw would address this problem adequately and work with Papua Provincial Government and other stakeholders in solving many cases occurred in Papua.

“Some students and citizens who are currently in detention following the mass rally against racism should be immediately realized once they found not involved. If they are found guilty, please do not hold the legal process,” he said.

“Initially, we named seven people as suspects. However, after further investigation, there are thirteen suspects. In the case of riot demonstration in Wamena, we currently determine seven suspects from previous three,” said the Police Commissioner Kamal.

Until now the police are continuing their investigation on these two cases that occurred in Expo-Waena Jayapura City and Wamena, Jayawijaya Regency. There is a possibility that the number of suspects in both cases will increase if the police find other sufficient evidence. (*)

West Papua has the first native woman as a head prosecutor