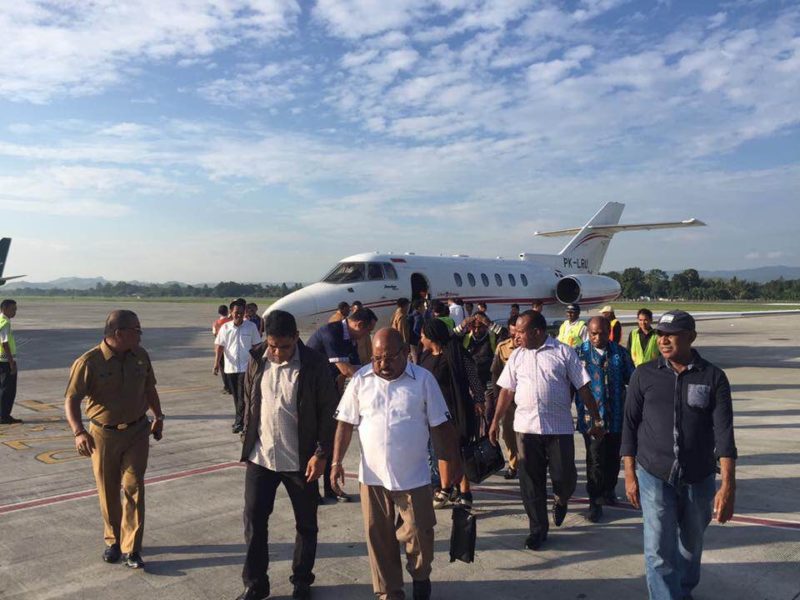 On Tuesday, 16 August 2016, Papua Governor Lukas Enembe and his officials arrived at Sentani Jayapura Airport with a jet flight - Jubi

On Tuesday, 16 August 2016, Papua Governor Lukas Enembe and his officials arrived at Sentani Jayapura Airport with a jet flight – Jubi

Jayapura, Jubi – The Hati Nurani Rakyat (Hanura) faction of the Papua Legislative Council criticized Papua Governor Lukas Enembe and officials who rented a jet to fly from Jakarta to Jayapura on Tuesday (16/8/2016).

Reportedly the governor rented it because it is difficult to get a flight from Jakarta to Jayapura while its price is so expensive.
The Chairman of Hanura Fraction of Papua Legislative Council Yan Permenas Mandenas through short message to Jubi on Wednesday (17/8/2016) said the governor’s move was excessive.
He said it would be justified if it was urgent and the governor must be in Papua immediately.
“Whether it was rented or sponsored, I think it’s excessive. Now it is difficult for people in Papua to use air transportation because of high ticket prices. But the governor was on jet arriving in Papua,” he said.
According to him, it could be justified if the governor was on jet to attend the official visit. But when the Minister of Politic, Legal and Security Affairs Wiranto and the Minister of Maritime Affairs Luhut Binsar Panjaitan came to Papua, the governor was not there.
“When the governor conducted a mission, the budget was clear. The regional officials, including legislators, if they conduct the mission, the travel budget could be allocated up to Rp 80 million. Well, to charter a jet flight, which budget it used? Whether it’s personal or what? It must be explained to the public to avoid the question,” he said.
He said a governor could not make the ticket price or availability as the reason to hire a jet, because there is an airways policy to prepare the spare seats for regional officials to anticipate the urgent situation.
Mandenas said the jet rent cost was not cheap. He pointed out, for the route from Halim Kusuma Jakarta Airport to Sentani Jayapura Airport, the cost is about USD 96.712 for jet Legacy 600 and USD 102.602,50 for jet Legacy 650, the price is including tax 10 percent for 8 passengers without luggage.
“In rupiah it would be around Rp 1 billion. If it used the regional budget, so it was a waste. The governor is only allowed to rent an airplane using the regional budget to visit the regions in Papua, not outside of Papua,” he said.
Meanwhile through email, the Chairman of Kesatuan Anak Adat Papua (Papua Customary Associate) Fransiskus Madai said recently the air ticket price to Papua is increased. But it couldn’t be an excuse to hire a jet. “A governor is supposed to show the simple gesture. He must be a model and example to his people. I regret it,” said Magai.
Further he questioned the performance of the governor’s domestic staff if it was true the governor was difficult to get a ticket. “If a governor wasn’t have access to ticket, so the performance of his staffs should be questioned,” he said.
On Tuesday, 16 August 2016, Papua Governor Lukas Enembe and his officials arrived at Sentani Jayapura Airport with a jet flight. Reportedly it was rented.
Meanwhile Papua Governor Lukas Enembe admitted he was forced to rent the jet flight of Lion Group to fly back to Jayapura with his wife and staffs from Jakarta on Monday (15/8/2016) evening.
“It’s difficult for us to find the seat flight yesterday. We were late when arriving at the airport, so we must take a charter flight in Halim Perdana Kusuma airport, and we found the airplane belongs to Lion Group,” said Lukas Enembe to reporters in Jayapura on Wednesday (17/8/2016).
Concerning to Mandenas’ criticism, he said the provincial government is actually capable to buy a private jet, but didn’t do it, because people in Papua are still living under the poverty line.
This issue was raised when a social networking user uploaded a photo capturing the governor and his officials’ arrival at his account. Then it would be a trending topic in the social networking. (*/rom)
Governor Jet Transportation