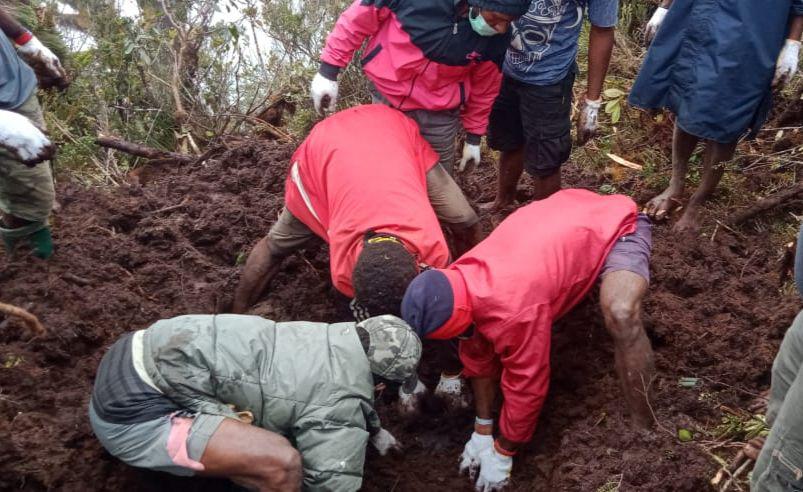 Jayapura, Jubi – Residents and activists from Pegunungan Tengah Human Rights Defender Networks (JapHAM) discovered five bodies on Thursday (10/20/2019) in Iniye Village, Mbua Sub-district, Nduga Regency. The bodies are suspected of the shooting victims of military culprits and covered by grass and leaves before being buried in one hole.

Nduga youth leader Samuel Tabuni, who is also a relative of the victims, said the victims left Wamena on 20 September for picking food supplies by car. They went together with a group of young men. Some group members then separated for taking food to their villages. Meanwhile, the victims took their supplies to Gua Batu, Gunung Kanbobo because they lived far away and decided to stay in Iniye Village.

“The next day on 21 September, the five victims went to take the food they stored at Gua Batu. Another group followed them later, but while they were walking, they heard gunfire. They were scared and decided not to continue to their walk to Gua Batu. They walked back to Ineye and called me,” Samuel Tabuni told on Thursday (10/10/2019).

However, after the call, he wasn’t sure about what had happened in Ineye. So he asked the police for further investigation. But the police said there was no report of the shooting incident in Mbua.

“The victims are my relatives, so I must continue to find the truth. After twenty days, it finally reveals that allegedly military culprits have shotted these five people,” said Samuel Tabuni.

He said a resident who called him witnessed military personnel at around Gua Batu.

Meanwhile, Kodam (regional military command) XVII/Cenderawasih admitted to Jubi that they have not yet received any information regarding the shooting incident in Iniye Village.

“We have not received an official report from the local unit,” said Colonel Eko Daryanto, Kodam spokesperson, to Jubi via WhatsApp.

Since a military conflict occurred in Nduga in the early of December last year, 189 residents are reportedly dead because of starvation in a refugee camp or shot by the military and police. Following the incident, thousands of Nduga residents have fled, and 39 churches have vacated.

Currently, according to Samuel Tabuni, Nduga residents demand the government to withdraw the joint military and police troops from Nduga. Furthermore, Nduga urgently needs humanitarian aid to supply food, medicine and support from the international humanitarian organisation to conduct an independent investigation on human rights violations in Nduga.

Meanwhile, Papua Governor Lukas Enembe hope Nduga refugees are not treated differently with refugees from another conflict in Wamena.

“Nduga residents are also the Indonesian citizens who should be treated equally as other residents,” said Governor Enembe.

Further, he said the case of Nduga refugee is an extraordinary case related to a humanitarian issue.

Therefore, he said he already communicated with the regents of Jayawijaya and Lanny Jaya because most of Nduga refugees are currently staying in these two regencies. He asked the regents from both regencies to treat Nduga refugees well because they are also Papuan citizens who need the attention of the government. (*)