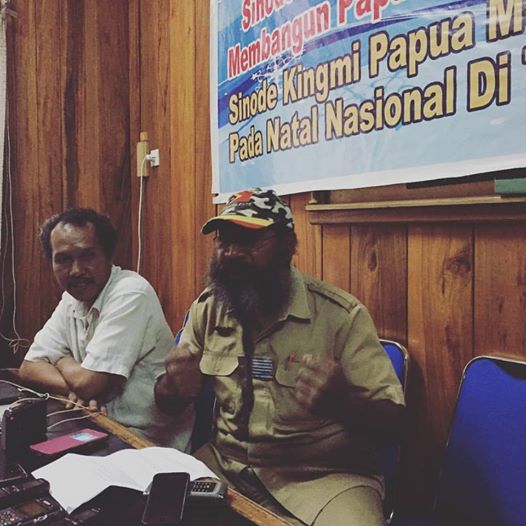 Greetings to all my brothers! Greetings from my heart!

On Thursday, November 19th 2015, I, Filep Jacob Semuel Karma, had been forcibly expelled from Abepura Prison. It all began on Wednesday, November 18th 2015 at 13:00 – 14:30 of local time, when I was under psychological pressure and not given opportunity talking to my lawyer. I only had an hour to think before Johan Jarangga (Department of Corrections Chief of the Ministry of Law and Human Rights, Papua Region), Bagus Kurniawan (Abepura Prison Chief) and some other prison officials.

Chronology of Wednesday, November 18th 2015, 13:00 – 14:30 PM
– I was called by Hanafi, the Development and Education Section Head of Abepura Prison, through his staff Irianto Pakombong.
– In his office, witnessed by Irianto Pakombong, Hanafi read a letter which he said it was issued by the Directorate General of Correctional Department of the Ministry of Law and Human Rights enclosed the list of recipients of the Decennial Remission, including me, Filep Karma who obtained three months remission.
– Then, Johan Jarangga, Bagus Kurniawan and the staffs of Abepura Prison and Department of Corrections Papua Region entered to Hanafi’s office.
– They pushed me to leave the prison on the same day; an hour immediately after the letter had been read.
– Following the release, I have not received any copy of letter mentioned earlier–issued by the Directorate General of Correctional Department of the Ministry of Law and Human Rights. Even I never had opportunity to see or read it. So, until today, I doubt the Decree that was said a reference of my release from Abepura Prison. In 2005, I also never received the Decree issued by the Indonesian Supreme Court. I just had a facsimile copy that was unclear and extremely dubious to be used as reference over my detention.
– I have complained and considered it as an inhuman treatment over me, since I was only given a day before forcibly expelled from Abepura Prison on November 19th, 2015.

The process of my exemption was very brutal, even for animals that are in captivity, may need some time to adapt before being released into the wild. I had been imprisoned for eleven years, but I have not been given the time to adapt. Am I, a Papuan, was nothing more valuable than an animal?

Herewith I reiterate my statements as follows:
1. I still refer to my letter dated 15 August 2015 about my rejection of all remission since I was still in prison last year until today.

2. I was forced to go to jail under an unclear degree and now forced to be out with similar treatment. The Racist Colonial Government of Indonesia has sought to destroy my credibility in many ways for the sake of their image and authority.

3. State apparatus’ behavior in Papua is a reflection of government and state’s conduct. Arbitrary detention, murders and mistreatments over the people of Papua for 54 years, the murder of those accused as members of Indonesian Communist Party, Talangsari Case, Tanjung Priok Case, the murder of Munir, Marsinah and Lapindo Case indicates the Government of Indonesia is a cruel and uncivilized government against the people of its colony and even its own people.

4. My current status, released from prison, wasn’t the result of a good will or good policy of the Racist Colonial Government of Indonesia as stated by Paulus Waterpauw, Papua Police Chief whom I consider as an invader’s servant in the Land of Papua. My freedom is materialized because of the international pressures against the racist government of Indonesia that continue to commit crimes against humanity and human rights violations against it colony’s people and against its own people.

As law enforcement officer, Mr. Paulus Waterpauw is better doing his responsibility to arrest both the unidentified people (OTK) and military personnel who continuosly kill Papuans rather than dealing with what I believe about the Papua liberation ideology. This ideology would never die!

On December 8th, 2014, dozens of people were shot in Enarotali when asking about the torture against two boys perpetrated by military personnel. Then, on last July, military personnel at Ugapuga, Dogiyai, killed a junior high school student Yoteni Agapa while Melianus Mote was wounded in his arm by bayonet. And the next, on July 17th, 2015, Endi Wanimbo (15) was shot dead and dozens of people were wounded in the Eid-Al-Fitr incident occurred in Tolikara. Most of victims are school age children. In the early of August, six Mobile Brigade personnel attacked a boy causing his death. He was tortured before being shot dead. Meanwhile a shooting incident was also occurred at Koperakopa, Timika at the end of August that killed two young men, Herman Mairimau and Yulianus Okoware and injured five others. Then another shooting was happened at Gorong-Gorong, Timika that killed Kaleb Bagau and wounded Fernando Saborefek.

The ten Papuan boys who were shot dead within the last 10 months were actually should gained serius attention from Mr. Paulus Waterpauw.

5. I have never been afraid and retreat from prison sentence for the sake of the vision of liberation and independence of the nation and my country, West Papua.

6. At the moment, I am still in a period of adaptation and recovery proces after being expelled from Abepura Prison. In the near future, I will conduct a medical check-up to examine my physical condition. But I would still keep the struggle on human rights and the right to freedom of expression peacefully.

Finally, I would like to express my gratitude to the press colleagues, and anyone any where who have shown Solidarity. I believe, what happened today, apart from the Power of God, can only happen because of their good attention and collaboration.
MOVE FORWARD, KEEP STRUGGLE, TAKE IT, FREEDOM AND LONG LIVE MY PEOPLE, WEST PAPUA.

There is no significant progress on Papua Human Right issue

There is No Justification for Senseless Murders Like in Timika

THIS PHOTO IS NOT HOAX; POLICE TORTURED CIVILIANS

BENNY GIAY: CHURCH HAS BEEN DEFEATED