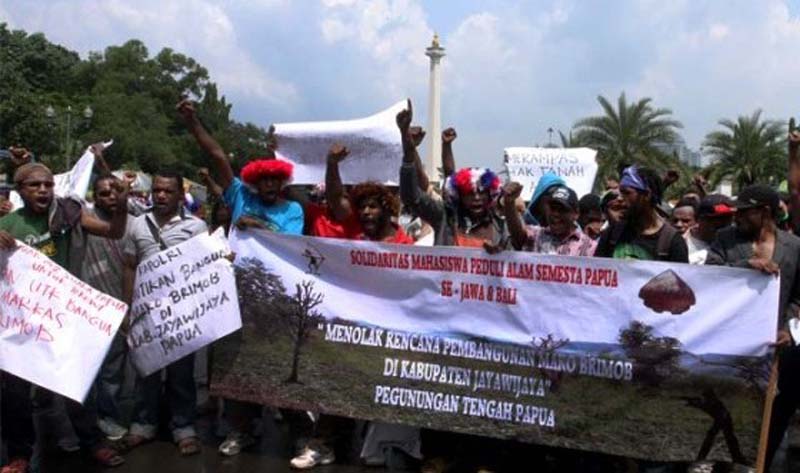 Students while held a protest to reject government’s plan to build Mobile Brigade headquarters at Wamena, on last April – Jubi

Wosilimo intellectual Sakeus Entama said he is strongly against the local government’s plan to build the Mobile Brigade headquarters and to place the Central Terminal in Wosi region on Tuesday (11/8/15) in Jayapura, Papua.
“We appeal people to well consider about the advantage of having the Mobile Brigade headquarter and Central Terminal which would only displace the planning areas of local community and increase the violence cases by military in Papua,” said Entama.

He further added people for not being provoked by Jayawijaya political elites and asked both Jayawijaya Government and local parliament to not enforce the local people to give their lands or agree on such plan.
“We have tracked those who facilitate the Jayawijaya Local Government to meet with local people and force them to agree on the plan and to give their land as well as to define a deadline therefore it was bringing a contradiction among the people,” he said.

Meanwhile, Forum Diskusi Weaksalek Jayapura Board member, Pinus Wantik said the Local Government and Parliament were elected by people and work for the people as well. They shouldn’t force people to follow their intention and neglect the people’s intention.
“Do not behalf the people for personal interest. We firmly decline this plan. The government should pay attention to the needs of students in doing the study and the development of Jayawijaya human resources for the future,” he said. (Agus Pabika/rom)