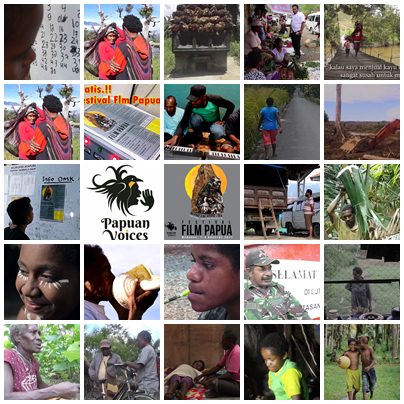 Wamena, Jubi – “I’m a Father and Mother” and “Nagosa” (Mama), two documentary films by Nelson Lokobal and Christian Kogoya, tells  much about native social life of the Baliem Valley.

Prior to its premiere at the Papua Film Festival (FFP) on August 7-9 in Merauke, Nelson (19) and Christina, a high school XII student, revealed a bit of the story behind their work.

“I am a Father and Mother” by Nelson, tells of the struggle of Desiana Sorabut, a 6th grader, along with her two siblings, shall live without their parents.

“So, the story is about Desiana parents who died when her still in grade 2 of elementary school,” said Nelson in Wamena.

In the film, Nelson describes the power of a girl as small as Desiana who was forced to take on the role of a parent in a family. After sitting in 6th grade, she does all the work like other parents in her village to keep her ‘kitchen aflame’ on.

Not just taking care of his garden. One of her parents’ treasures is a pig. Pig farm in the yard of the house. Occasionally, he sells boiled peanuts his garden produce, at school.

“The fate of children like Desiana is similar to many people in the city of Wamena … the story was for me interested so I made the film,” Nelson explained.

Another worthy documentary film is “Nagosa.” The high school student XII’s film tells the story of the role of a woman and mother, who works hard to sustain the needs of her family, even to support her husband’s education.

Every day, Nagosa must travel 4 km from her home in the suburb of Wamena to the center of the city.

Christina said, “Every day, I swees the road around the town of Wamena. From the job, she earned a wage from the local government. In addition, he also sells firewood,” she said.

Those two stories are included in a series of Papuan documentaries on the FFP next week.

307 NATIVE LANGUAGES ARE IDENTIFIED IN PAPUA

Department of Education to Incorporate Local Languages in Curriculum