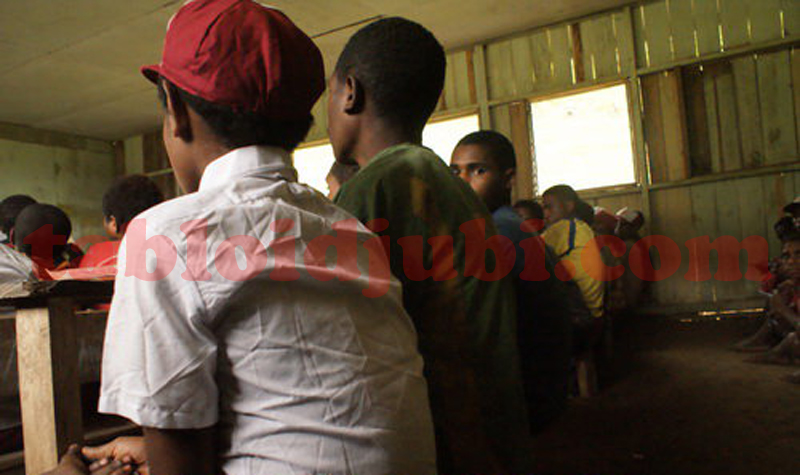 Jayapura, Jubi – The Indonesian Papua Highland Student Association (AMPTPI) said the state of education in villages is an indicator of how the government does not properly use Papua Special Autonomy Funds to build human resources.

The measurements and standards are there in the villages instead of the city. If referring to the villages, the Special Autonomy Fund for education is not useful for Papuans. Education in the villages is so far behind,” the Secretary General of AMPTPI, Yanuarius Lagowan, said in Waena, Jayapura City on Monday (07/09/2015).

He named some local educational institutions that he was visited are not running well, either it’s private or public school. Those schools seems stagnant to run the learning activities due to the lack of teachers and other related facilities. “Some private and public schools are closed. In several areas in Paniai, Keerom, in particular at the border area, the lack of teachers made the Military personnel taking over their role. Meanwhile in Wamena, schools are not running in Elabukama region due to the road access to the schools.

About the closure of schools, Markus Mawel, resident of Waga-Waga village of Kurulu Sub-district, Jayawijaya Regency confirmed it. He said one of schools in his village, namely Sekolah Dasar Yayasan Pendidikan dan Persekolahan Katolik was temporarily closed due to the lack of teachers.

NO FREE HEALTH CARE FOR NATIVE PAPUANS AT RSUD ABEPURA

Lanny Jaya Regency to Have 50 Teachers under Indonesia Smart Program

Some Elementary School Pupils Unable to Read in Waris, Keerom