DPRP asked the police to stop being a spokesperson for Freeport 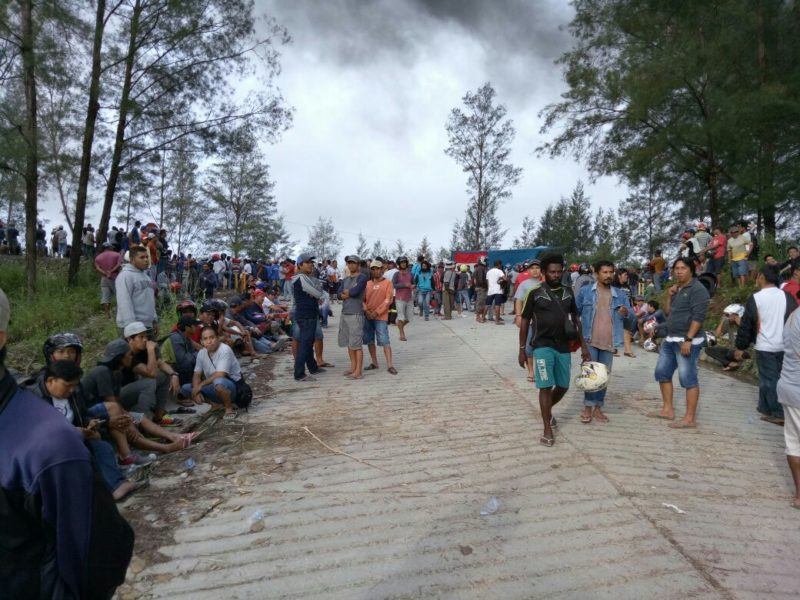 Jayapura, Jubi – The dissolution of demonstration and street blocking by workers of Freeport Indonesia in Check Point 28 area of the mining site by police on Saturday (August 19) responded by Papuan People’s Legislative Assembly (DPRP).

“Since May 2017, workers have addressed their problems. They insisted their rights through strike. Now it is in the fourth month. It’s as if the workers are fighting themselves without state support. The government tends to represent Freeport’s statements, not defending the rights of citizens who are oppressed and crushed just like that,” said Laurenzus Kadepa, Member of Commission I DPRP in charge of Law and Human Rights.

He was surprised, although the government of Joko Widodo through the ministry of ESDM has improves the specific regulation of PTFI, the police have not been able to balance this government policy. The paradigm of law enforcement officers is no different from the first time since Freeport existed.

“Whatever Freeport’s statements, that’s what the police would say when any problems related occur,” he said.

He pointed out, when PTFI called that the blockade in Check Point 28 and Culvert in Timika Papua conducted by a group of people who was dismissed for work truancy, the police through the Head of Public Relations also say so.

“The police seem to behave as a company spokesperson, not as a law enforcement agency,” he said irritably.

According to him, the struggle of PTFI workers seemed to vanish when their voice about their fate were buried with the news of rioting, burning and so on. The national media of Indonesia is contrived all, he said. Rarely does it fit the actual demands. There is also hardly any response from Manpower minister related to worker problems.

“Media is bought by Freeport to silent anyone who demands Freeport to obey the rules. Media companies no longer distinguish from Freeport’s statement, including police statement, loaded with the same editor. Strange,“ he continued.

He firmly said that PTFI’s immunity on the Earth Amungsa should be terminated.

Due to the police’s forced demolition of blockade at Check Point 28 yesterday (August 19), four people were injured by rubber bullets, live ammunition and police blows. In addition, 11 people were detained by the police.

John Wayang was injured on his left toe so it had to be sewn in hospital, while Judas was hit by a sharp bullet on the heel. Sapsuha was hit by a rubber bullet on his bottom.

“An employee wife, Ansye Lumenta was beaten by members of Brimob (mobile brigade) at the time of the incident. He fell, so his hands and feet were injured,” said Tri.

After the forced dissolution, Tri said that 11 people were detained by the Police. They were detained at the Mimika police headquarters.

PTFI through its spokeswoman Riza Pratama said the action at Check Point 28 was done by a former employee.

“They are a group of former employees in large numbers who occupy the area (Check Point 28),” he explained.

PT Freeport Indonesia’s management had advised its employees not to cross the Check Point 28 area until further notice.

Due to the forced demolition by the police, PTFI employees who blocked the road carried out the destruction of several contractor offices and Culvert terminals.

These contractor offices are alleged to continue to receive new employees while their old employees who dismiss unilaterally by PTFI have not clarified their status.(*)