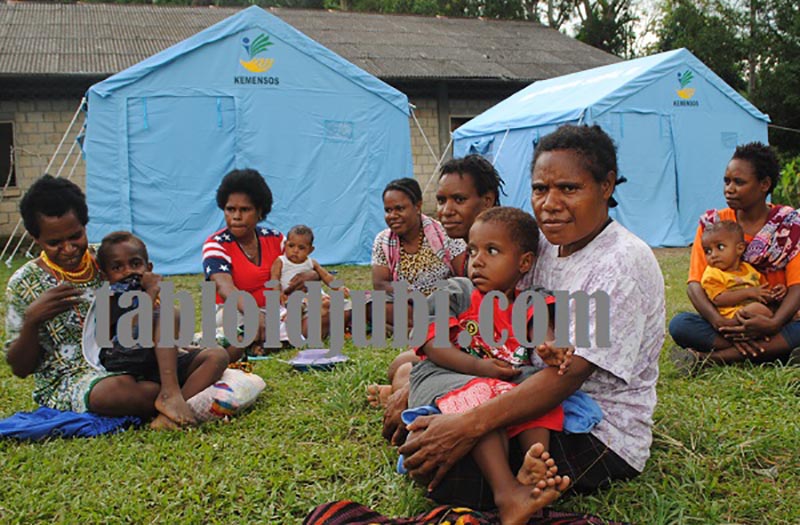 Sentani, Jubi – Some of about 327 people displaced by recent violence in Timika, Mimika have suffered from diseases in their temporary shelters in Jayapura Regency.

Refugee Coordinator Johny Wonda told Jubi in Sentani on Sunday (7/8/2016) that many of the displaced showed symptoms of diseases such as diarrhea, fever, nausea, and respiratory infection.

The displace people have not received adequate health care even after the media highlighted their plight, Wonda said.

One of the displaced,  Mina Kogoya, 35, said her three months daughter Ria Lambe have been suffering from ulcers and fever since last week.

“He’s had diarrhea for three days and refused to eat,” she said.

Volunteer for Timikia refugees Jemi Tabuni said among the sickening refugees, he helped to care 55, about 4 to 6 babies and 7 children. The rest is teenagers and adults.

“These people were just here when the nurse was coming,” he said.

He admitted the doctor has examined the patients on Monday afternoon (8/8/2016) but some would be continued to examine on Tuesday (9/8/2016) because the doctor already left.

By phone, Nurse Alfa Rumbino said she was treating the patients at Palomo. “From the examination, many of them are getting the repertory infection, diarrhea, cough, and flu, and most of them are adults and elderlies,” she said. (Yance Wenda/rom)