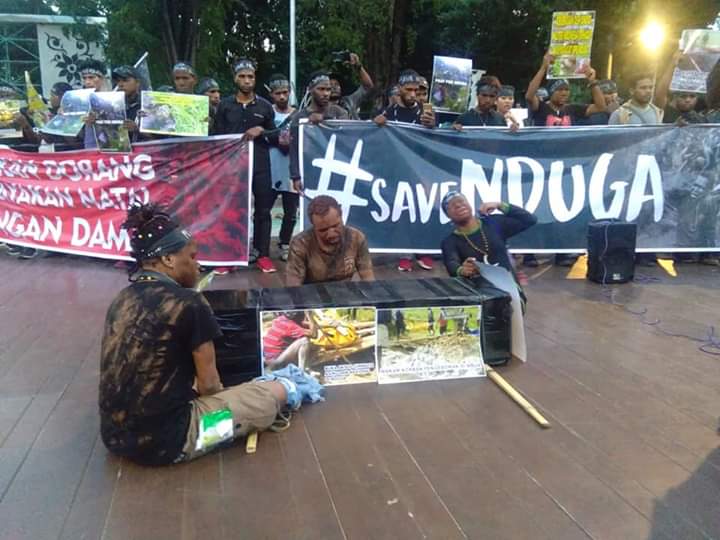 Papuan students studying in Java Island in a protest demanding justice for committed violence by the Indonesian military against civilians in Ndugama, Papua – Jubi/AMP Documentation

Jayapura, Jubi – The way government handling the humanitarian conflict in Papua has become a spotlight. Many people think the government are being discriminative in handling Nduga refugees compared to refugees from Wamena.

A native Ndugama Resina Lokbere said that she is discouraged seeing how the government differently treated refugees from both areas. “I see a huge difference approach here. Although the government always declare our national motto ‘unity in diversity’, but I have not seen this applied in Papua. A conflict in Nduga has occurred since 1 December 2018. Since then, Nduga residents must leave their villages and flee to other regions and the jungle to avoid a military operation,” she said.

“Thousands of youth and children drop out of school, and now they are living under poor health condition. There is economic loses as well. Who knows whether they will be survived or dead after a few months of suffering without enough food and water? I don’t know. Only God is the witness of their suffering,” said Resina whose relatives refuge from Nduga.

“The government should not perceive conflicts in Nduga and Wamena merely from a political view but also a humanitarian aspect. They are all your people. They need you. They need your action, not your promises on the public stage,” she said.

Meanwhile, a local parliament member Laurenzus Kadepa also think the government has shown different response in handling refugees due to conflicts occurred in Nduga and Wamena.

According to him, he observed that the victims of conflict in Wamena were promptly evacuated or accommodated with adequate facilities. They had enough food and other basic needs during the evacuation. It was opposite to what had happened to Nduga residents. They had to walk for days from their villages to Wamena and other regions.

“While there was a lack of access to food aid distribution for Nduga residents, it didn’t happen for Wamena refugees. They had planes to transport them, shelter and enough food,” he said.

Seeing what has been happening lately in Papua, the relevant stakeholders in Papua and the central government should immediately think a solution to end this current complicated situation. (*)